I take my charitable giving very seriously. If I give money to a nonprofit organization, I want to know that it will be used efficiently to address the issues that I care about most. When my husband and I got an invitation in 2006 to visit PETA headquarters in Norfolk, Virginia, we saw it as an opportunity to do a little undercover investigation of our own— who are these PETA staffers we’ve been hearing about, and how effective are they at achieving results?

Once a year, PETA opens the doors of its main office to members of its Vanguard Society and Augustus Club. The Vanguard Society includes everyone who make a minimum of one $500 donation to PETA in a year. The Augustus Club is for people who have named PETA as a beneficiary in their will, life insurance policy, retirement account, annuity, or trust.

The Vanguard/Augustus weekend started with a tour of the building and informal presentations by each PETA department head. We then joined the entire staff for the monthly employee meeting, during which we heard the latest news on current campaigns. On day two, we attended classes given by some of PETA’s most experienced staffers on everything from vegan cooking to PETA’s innovative new activism strategies to a how-to session on answering tough questions from meat-eaters. We also had one-on-one time with senior staffers so we could ask some tough questions of our own. They explained the thinking and strategy behind some of the more controversial campaigns, and we gained a new appreciation for how effectively PETA advocates for animals. We were blown away by the passion, intelligence, and creativity of this fearless and dedicated group of people.

The vegan food served over the weekend was fabulous. My husband and I were vegetarians when we arrived at PETA, but by the time we got home we had decided to go vegan. It came down to this: If vegan food can be that delicious, then there’s no excuse for eating anything else! 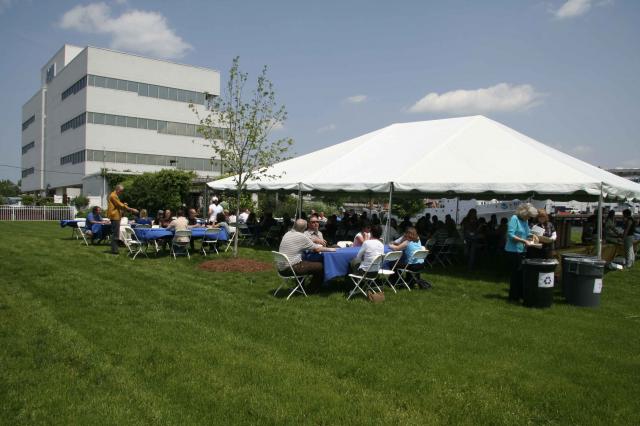 I recently returned from my third Vanguard/Augustus visit to PETA. I had a great time reconnecting with PETA staffers and meeting the other guests. One couple told me a fascinating story about some animal advocacy that they had done through their church. Responding to their church bulletin’s statement that “all members are ministers,” they volunteered to present a sermon about compassionate stewardship of animals, followed by a vegan reception for the congregation. They combined the sermon with a slide presentation that showed the cruel treatment of animals on factory farms.

At the post-service reception, this couple offered easy-to-prepare vegan goodies for people to try. They also provided leaflets like PETA’s vegetarian/vegan starter kit and “Meat’s Not Green” so that interested church members could learn more. They even produced their own handout explaining different ways that individuals could help animals and then followed up with an article in their church newsletter, where they emphasized the moral imperative to show mercy to the weak: “And no creature on earth is more powerless than an animal born, raised, and slaughtered in an American factory farm.” Meeting this couple and many others at PETA inspired me to keep thinking of creative ways to reach people with a message of compassion for animals.

OK, so we weren’t really undercover during our PETA visits—we certainly weren’t digging around in the trash for incriminating documents. But we did learn a lot about PETA’s undercover investigations and how important they are in generating media coverage of cruelty to animals that is normally invisible to the public. Recent PETA investigations have exposed animal abuse at PETCO and PetSmart suppliers; dairy, pig, and turkey factory farms; slaughterhouses; university laboratories; and circuses. These investigations are expensive—each one can cost $30,000 or more. But after seeing how much national media coverage a single investigation can generate, I realized that this is an incredibly effective way to spend money to raise awareness of animal suffering. By donating to PETA, I’m helping to shine a light on this hidden cruelty, and as a bonus, I get to visit PETA headquarters too. What a great way to help make the world a kinder place.