Laurel Braitman’s Animal Madness: How Anxious Dogs, Compulsive Parrots, and Elephants in Recovery Help Us Understand Ourselves is a beautifully written, heartfelt, and often heartbreaking look at the ways in which animals, like humans, can “suffer from emotional thunderstorms that make [their] lives more difficult, and sometimes impossible.” It won’t surprise Prime readers to hear that in many cases, we humans are the cause of other animals’ mental distress.

As far back as 1881, the Los Angeles Times published a rap sheet of captive elephants who’d gone mad and attacked or killed their keepers. Braitman tells readers about Namu, an orca who was captured in 1966 and taken to Seattle’s Marine Aquarium, “where observers watched him ramming his head against the side of his tank and screaming loudly, his calls sometimes returned by passing orcas in Puget Sound.” We learn about Monarch, a California grizzly who was trapped at the behest of newspaper magnate William Randolph Hearst and put on display at Golden Gate Park, where he spent his days lying dejectedly inside a hole that he’d dug out between two boulders, staring “blankly through the bars of his cage.” We learn of Brian, a bonobo born at Yerkes National Primate Research Center, who became so neurotic that he vomited dozens of times a day, tore off his own fingernails, and repeatedly thrust his fist into his rectum so intensely that he lost large amounts of blood. (Spoiler alert: Brian eventually recovers, with the help of a human psychiatrist.) The stories go on and on.

Braitman takes an especially hard look at zoos and aquariums. Since the 1970s, animals in these facilities have routinely been given antipsychotic drugs in order to treat signs of mental illness—one of the industry’s dirty secrets. Who wants to hear that captive gorillas or belugas need Valium and Prozac “to deal with their lives”? So-called “enrichment programs” are as much for us as they are for the animals. “The plastic toys in the arms of the octopus or in the toothy grip of the aquarium seal are there not only to occupy the animals’ minds, but also to make us feel better about ourselves watching them,” Braitman explains.

Champions of this industry will argue that many animals in zoos were born in captivity and could not survive on their own or that they have longer life spans than their free-roaming counterparts. “These points are all trotted out like show ponies anytime the animal display industry comes under attack,” Braitman writes. “But a tally of years lived and calorically balanced meals eaten doesn’t account for quality of life or the pleasure that can come from making one’s own decisions.”

But even the most beloved animals can’t always weather the emotional storms. Braitman’s interest in the issue of animal madness began when her dog, Oliver, who suffered from debilitating separation anxiety, pushed an air-conditioning unit out of a window, tore a hole through the screen, and jumped—four floors down—while Braitman was away. Miraculously, Oliver survived the fall, but his anxiety only got worse. 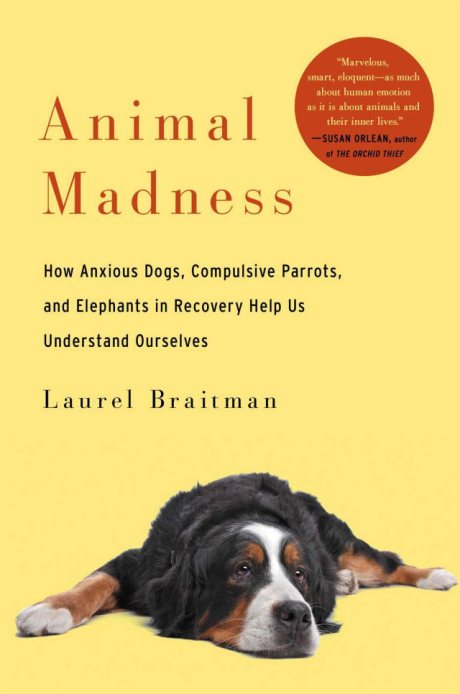 So what can we do? Braitman ends her book with a discussion of steps that we humans can take to stop causing needless suffering to other animals—from shutting down zoos to refusing to buy fur or testing cosmetics on animals in laboratories. And everyone who shares his or her life with an animal companion is urged to “stop leading the sorts of lives that cause large numbers of our pets to end up on psychopharmaceuticals. We could spend more time walking and playing with them and less time on our phones, checking email and watching television.” Amen.

Animal Madness is an important and thought-provoking book that’ll help open readers’ eyes to the rich and deep emotional lives of animals—and to the consequences of how we treat them.