If John Robbins’ last name sounds familiar to you, it’s probably because his father was one of the founders of the world’s largest ice cream company, Baskin-Robbins. Robbins was groomed from an early age to help take over the family business—he even grew up with an ice cream cone–shaped swimming pool in the backyard. But he couldn’t do it. As he wrote in his seminal book, Diet for a New America, “I had to say no, because something else was calling me, and no matter how hard I tried, I could not ignore it.” 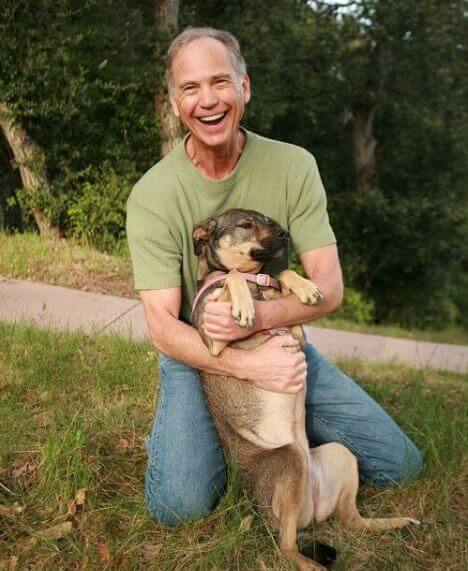 Robbins wrote that book nearly 30 years ago. Thoroughly researched and heavily footnoted, it was the first to make such a strong case for ways animal agriculture (with government backing) is harmful to animals, the environment, and human health. It was a revolutionary work that made people think, persuaded them to change the way they ate, and paved the way for documentaries such as Forks Over Knives, Vegucated, and Cowspiracy.

Did Robbins rest on his laurels? Hardly! He’s written numerous books since then and even started a family project with his son, Ocean, called the Food Revolution Summit. After being inspired to find a way to inform larger numbers of people about the life-changing benefits of vegan food, John and Ocean began their summit, which attracts thousands of participants every year. We asked John to tell us more about his mission to change the way Americans eat:

When my uncle, Burt Baskin, died of a heart attack at the age of 54, I asked my dad if he thought there could be any connection between his death and the amount of ice cream he would eat. (He was a very big man who ate a lot of ice cream.) My dad said, “No, his ticker just got tired and stopped working.” I could understand why my father would not want even to consider the possibility that there might be a connection between ice cream and heart disease. He had by that time manufactured and sold more ice cream than anyone in the history of the planet. But I felt a responsibility to look into it. And I came to the conclusion that ice cream, which is full of saturated dairy fats and sugar, was indeed linked to heart disease.

An ice cream cone isn’t going to kill anyone, but the more you eat, the more likely you are to have heart disease, diabetes, and many other problems. If you’re in the ice cream business, you want people to eat a lot. That’s the business model. And I didn’t want to make my living selling a product that might be undermining anyone’s health. Also, I visited the large commercial dairies where Baskin-Robbins got its dairy products, and I saw how the cows were treated. It broke my heart to see them treated so poorly. I found the idea of profiting from such cruelty to be appalling.

There is a lot more awareness now that animals in factory farms and feedlots are routinely subjected to horrible conditions. And a lot more people are standing in opposition to this systematic cruelty. And there is also a lot more awareness about the connection between industrial meat production, greenhouse-gas emissions, and the destabilization of our climate.

A much deeper understanding of what’s at stake in our food choices today and far greater clarity about how they can look better, feel better, have far more energy and vibrancy, and greatly reduce their risk for disease.

Because we don’t need food that is a little less cruel to the animals or that contains a few less chemicals or that is a little less unhealthy for our bodies and the environment. We need a revolution in the way we eat, and we think we can achieve one. We’ve seen in the last 15 years a four-fold increase in sales of organic foods. We now have polls in the United States showing that more than 90 percent of the American public think that animals raised for food on farms deserve to be free from cruelty and that the number of people who want to ban junk food marketing that targets kids has quadrupled in the last eight years. The food revolution is showing up often in everyday, very simple choices: where people shop, what they choose to buy when they shop, and what they choose to feed their families. It is a whole lot of little drops in the bucket, but when you add it up, it can actually become more than a bucket. It can start to become the tide of history, turning.

Learn more by taking part in the 2022 Food Revolution Summit, being held from April 23 to May 1. Join today!