On June 11, PETA held a benefit reception in Washington, D.C., to raise funds for PETA’s strategic eyewitness investigations. The event was special, in part, because PETA President Ingrid Newkirk, who was celebrating her birthday that night, had the pleasure of presenting the inaugural Gregory J. Reiter Award to Katie McCotter, who has been a foster-mother to many animals PETA has rescued from abusive situations in rural Virginia and North Carolina. 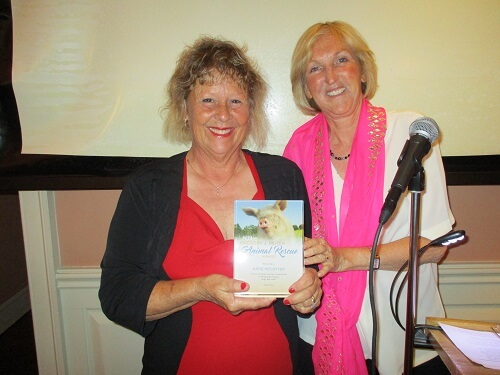 We couldn’t think of a more fitting person to receive the first Gregory J. Reiter Award, since the late Greg Reiter, like Katie, was always there for animals in need. Greg and his loving wife, Alysoun Mahoney, who was present at the event, rescued many animals together, including two horses, Henry and Caroline, and a former “backyard dog,” Itchy, who now knows what it feels like to be respected and cared for. (Alysoun wrote a touching Prime blog post about her and her husband’s shared concern for animals and support of PETA.)

PETA was privileged to honor Greg’s memory by recognizing Katie and her vital animal-rescue work. Finding homes for needy animals is challenging, to say the least—especially farmed animals, like Sherlock, the pig who was rescued after he fell off a truck en route to a slaughterhouse; Butchy Boy, the goose we rescued from a muddy pen that contained nothing but a tub of filthy water; Amanda, the stray chicken who was found roaming the streets; and Pippi, a Vietnamese pot-bellied pig who could barely eat or walk because her teeth and hooves were so overgrown.

But all these animals found a home with Katie and her husband, Mike, on their farm in Suffolk, Virginia.

The compassionate couple even took in a number of little and not-so-little pigs PETA rescued over the years as well as a miniature, unsocialized horse named Sebastian who suffered from nerve damage but became far healthier and happier, thanks to Katie’s round-the-clock care.

When Katie can’t foster animals herself, she helps PETA find caring, reliable foster homes for them—as she did with Henry and Caroline, the horses adopted by Greg and Alysoun.

It was only fitting for Katie to receive the inaugural Gregory J. Reiter Award, and on behalf of Alysoun and everyone at PETA, I want to thank and congratulate her for everything that she does for animals.