To meet its goal of replacing the use of animals in laboratories with sophisticated non-animal methods, PETA combines scientific expertise with media knowhow, grassroots activism, an enviable command of social media, and financial support for the development of non-animal tests. PETA prevents tens of thousands of animals every year from being poisoned, burned, cut open, and killed and helps millions more by stopping experiments that would have continued into the future.

We heralded a groundbreaking victory when the National Institutes of Health announced that psychological distress experiments conducted by longtime researcher Stephen Suomi and exposed by PETA, in which mother and baby monkeys were intentionally drugged, isolated, tormented, and traumatized, will now end.

PETA’s work is having an impact not only in the U.S. but also in other parts of the world. For example, PETA and our international affiliates are the only organizations working on an international scale to replace the use of animals in medical training courses, including the widely taught Advanced Trauma Life Support (ATLS) course.

For decades, medical centers around the world teaching ATLS skills have been requiring doctors to cut up live dogs, goats, pigs, or sheep. But studies show that physicians receive better training by using simulators that mimic human physiology and allow trainees to repeat procedures until they’re proficient—which the crude use of animals cannot do.

Many medical centers in other countries are interested in using simulators for ATLS but can’t afford them. That’s why PETA established a landmark partnership with a company called Simulab, which makes TraumaMan—the gold standard of surgical training technology—to donate high-tech surgical simulators to them.

Having had major success with our initial donation of 67 TraumaMan simulators to nine countries in 2014, we recently donated 40 more simulators to seven additional countries—China, Cyprus, Greece, Indonesia, Pakistan, the Philippines, and the United Arab Emirates. This means that thousands of dogs, pigs, goats, and sheep each year will be spared the trauma of being cut open and killed and that thousands of doctors will gain superior surgical skills. 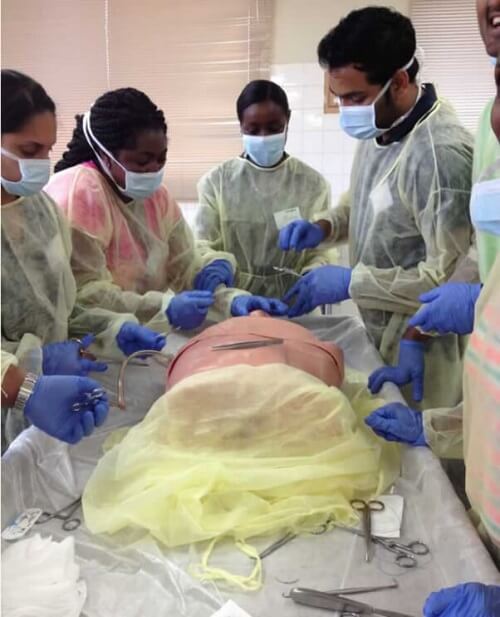 PETA is also working to replace the use of animals in military medical training drills, which results in the senseless maiming and killing of thousands of animals each year.

Much of this cruel, archaic, and inferior training is led by contractors like Deployment Medicine International (DMI), which, until recently, was the self-proclaimed “largest trainer of US military forces in operational medicine.” But with our Augustus Club members’ generous support, we’ve won major victories in this campaign.

You may recall that last year, PETA released a shocking exposé of the stabbing, shooting, and mutilation of live pigs—as well as the appalling abuse of soldiers—by DMI. After PETA filed complaints, the medical license of DMI’s president was suspended in several states, the company lost its coveted medical education accreditation, and the U.S. government banned DMI from receiving any contracts for the next 15 years!

We also recently persuaded local government officials to order an end to similar pig-killing military drills in San Diego, California, and Suffolk, Virginia. These are only the most recent advances that we’ve made toward getting the Department of Defense (DOD) to stop mutilating animals in favor of humane human-patient simulators that the military’s own studies show are an effective replacement for crude animal laboratories. 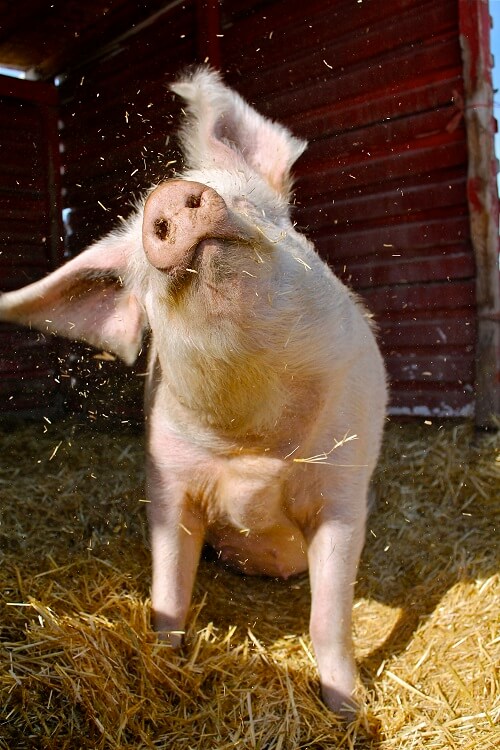 Earlier last year, following PETA campaigns, the DOD banned the use of animals in six different medical training areas in favor of human simulators; the University of Georgia ended its use of dogs and other animals in trauma training exercises for the Georgia National Guard and others; and following more than three years of campaigning by PETA and our international affiliates, Norway, for the first time, rejected its Armed Forces’ application to use live pigs in crude medical training exercises.

Universities have always been a hotbed of animal experimentation, but PETA is putting an end to that, too. Following an extensive PETA campaign to end cruel auditory experiments on cats at the University of Wisconsin—Madison, the laboratory closed its doors, its lead investigator retired, and the remaining cats were adopted. For decades, cats had been subjected to years of experiments on their brains and ears, including being deafened and starved and having holes drilled into their skulls, metal restraint posts screwed into their heads, and steel coils implanted in their eyes. PETA’s campaign entailed a successful open-records battle with the school, colorful demonstrations, phone blockades, more than 369,000 e-mails from PETA supporters, civil disobedience by Oscar nominee James Cromwell, citywide bus ads, federal complaints that prompted government penalties, and pressure from a courageous Augustus Club member who has had a longtime connection with the university.

In another hard-fought but groundbreaking victory, the National Institutes of Health (NIH) decided to retire all federally owned chimpanzees from laboratories and to make plans for them to spend the rest of their lives in reputable sanctuaries. For decades, PETA has exposed cruelty to chimpanzees in laboratories, filed complaints against laboratories that experiment on chimpanzees, enlisted the help of members of Congress, organized demonstrations, gained celebrity support, filed shareholder resolutions, launched online advocacy campaigns, and called for an end to this barbaric practice in both popular and academic publications.

In 2013, after the Institute of Medicine concluded that experiments on chimpanzees were “unnecessary” and PETA members and others flooded the agency with demands to release them, NIH agreed to retire most of its 360 chimpanzees but planned to keep 50 for potential future experimentation. Then in 2015, the U.S. Fish and Wildlife Service gave all chimpanzees, including those in laboratories, “endangered” status. This effectively prohibits any invasive experimentation on them, rendering moot NIH’s plan to keep 50 in reserve. In announcing its decision to retire all remaining chimpanzees, NIH director Francis Collins also noted a “complete absence of interest” in experimentation on chimpanzees as the reason.

On the product-testing front, PETA’s list of cruelty-free companies that never test their products, formulations, or ingredients on animals now totals more than 1,900 (having grown from 1,700 in the past year alone). And our impact is spanning oceans. For example, until recently, all cosmetics companies selling in China were required to pay for cruel tests on animals, but PETA has been providing funding for experts to educate and train scientists and government officials in China in the use of non-animal testing methods. We celebrated important progress in this campaign when the Chinese government ended its longstanding requirement that cosmetics manufactured in China by Chinese-owned companies be tested on animals in order to be sold there. In an exciting campaign milestone, Shanghai-based personal-care company eco&more recently became the very first Chinese company to join PETA’s cruelty-free list!

Astonishingly, tests on animals are even conducted for products as innocuous as pasta and soy sauce! Take, for example, Barilla—the world’s largest pasta company. PETA discovered published studies by the company detailing cruel experiments on rats that were conducted in order to evaluate potential health claims about wheat. We also revealed that for more than 15 years, Kikkoman had conducted experiments in which rabbits, mice, and rats were force-fed soy and other food products, blasted with radiation, cut open, and decapitated just to make dubious health claims—even though the U.S. Food and Drug Administration states that animal experiments cannot be used to substantiate human health claims about food.

Fortunately, thanks to PETA, both companies have now banned animal tests for their products and their ingredients. Barilla and Kikkoman are the latest additions to our growing list of food companies— including The Coca-Cola Company, Welch’s, Lipton, and Ocean Spray—that PETA has persuaded to switch to non-animal test methods. 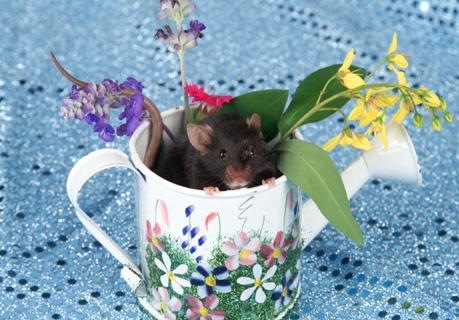 WHAT YOU CAN DO

After a government panel concluded that experiments on chimpanzees were “unnecessary,” NIH promised to send all federally owned chimpanzees to sanctuaries, but since this announcement, few have been retired and many have died while waiting.

Please help us finally close this dark chapter in medical history by contacting James Anderson, director of the NIH Division of Program Coordination, Planning, and Strategic Initiatives at 301-402-9852 or email [email protected] and asking that NIH make arrangements immediately for the chimpanzees’ retirement to accredited sanctuaries so that they can live out their remaining days in peace.

This article was originally published in PETA’s Augustus Club newsletter. PETA’s Augustus Club is a complimentary club honoring those who are leaving a legacy for animals through a planned gift to PETA. If you have made a planned gift to PETA, please let us know so that we can thank you! If you have not yet left a legacy for animals but would like information on how to do so, please contact us.