If you haven’t heard about Worzel Wooface, a rescued lurcher (aka “sighthound cross”) in the U.K. who is taking the literary world by storm—well, you’re in for a “fabumazing” treat. Worzel is the “author” of several books, as well as his own blog and newspaper column. They’re written in his inimitable style, full of, ahem, creative grammar, spelling, and punctuation stylings. Suffice it to say that after reading a few chapters of one of his books, you’ll find yourself tossing out Worzelisms like “bogged off” and “confuddled” as if Worzelese were your native language. Recently, PETA staffer Alisa Mullins’ retired racing greyhound, Jasper Bossyboots, chatted with Worzel, sighthound to sighthound, to get some insights into what makes this literary lurcher tick: 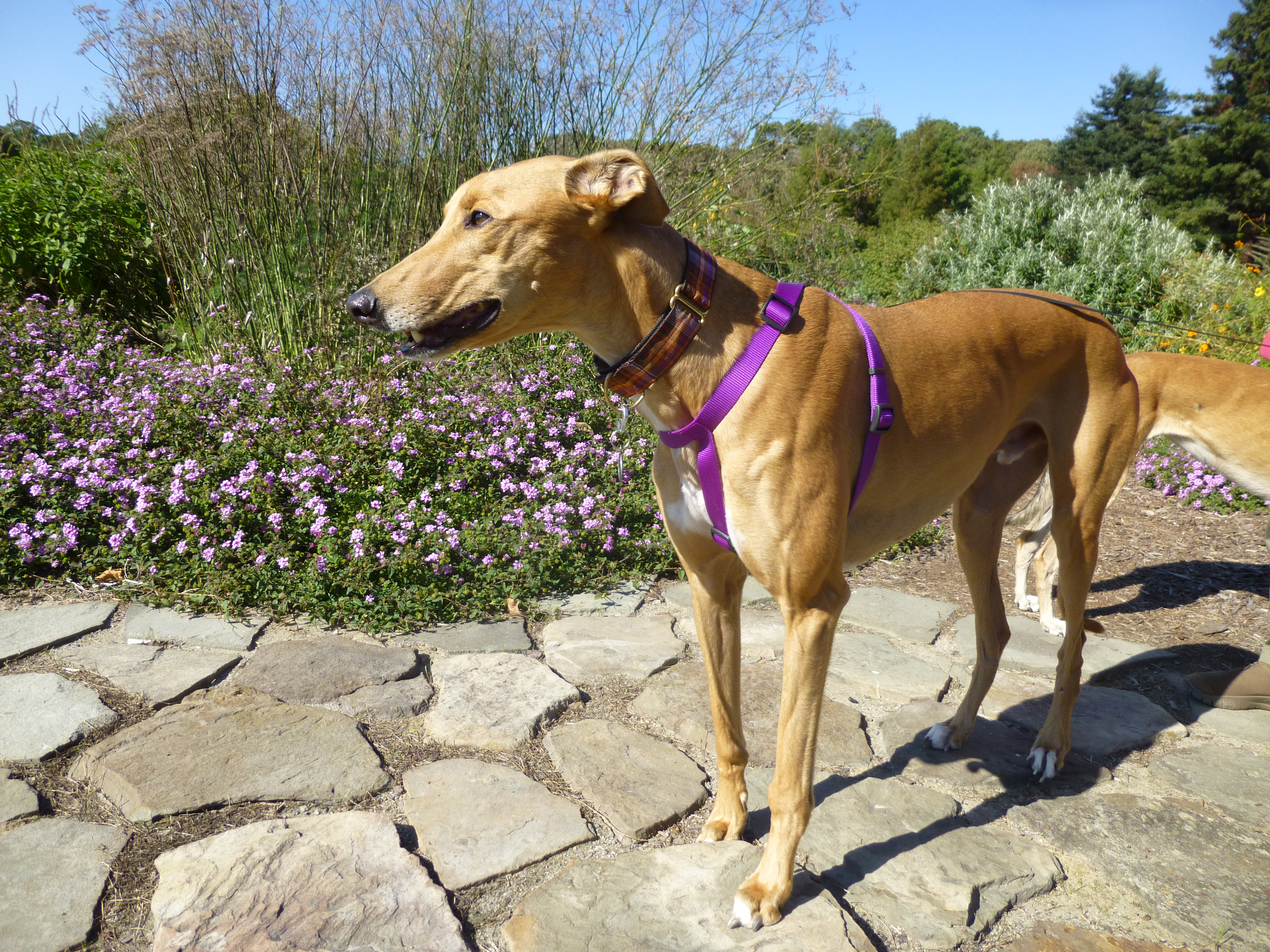 I are a fuge fan of Worzel’s, so I was terribibbley hexcited when he hagreed to answer my kwestions about being a sellebberty dog and the challenjes of being an awthor what can’t reed or rite. 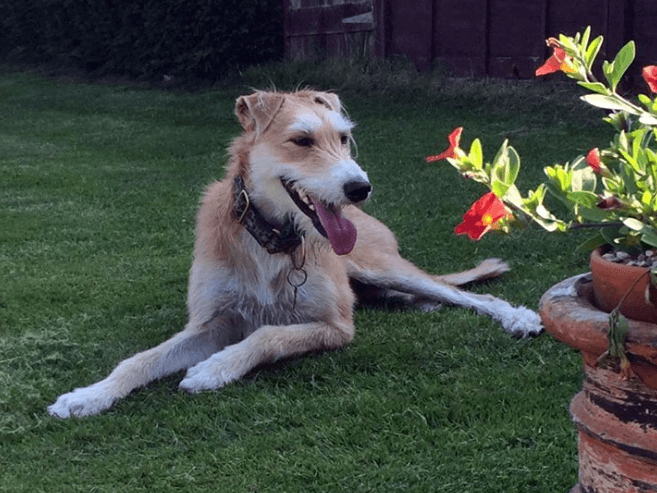 Jasper Bossyboots: I luff your books (they tasted much betterer than the ones my mum has lefted on the coffee table). My favoritest part was where you hesplained the himportance of “Gotcha Day.” It’s even betterer than birfdays, cuz it’s when we got gotted and wasn’t lefted anymore.

Worzel Wooface: Fank oo for your fabumazing forts and actual questions wot are much betterer than a lot I have binned asked in the past! Gotcha Days are the bestest best. My birfday is a guess, to be quite actual honest, and is honly important for bits of paper. But my Gotcha Day is remembered every year. I does not like fuge fusses and parties, but we always try to have Worzel’s perfick day with a walk and my favourite dinner and a fabumazing playtime.

The fing I are asked most often is to “sit,” but that isn’t so much a question as a hinstruction wot I often do hignore, especially when there is no treat being offered. But your questions are quite very hinteresting, so I has answered them all (even though there was no treat to go with them…).

JB: One fing I’m kyureeuss about. How did you do typing your books when you doesn’t have posable fumbs? Did you dictate to yer mum? She must be betterer at hunderstanding woofs and barks than my mum, who can be a bit dense sometimes, just between you and me.

WW: It’s all in the hibrows. I has got hibrows wot is very hexpressive and do saying more than a fousand words. Mum just looks at me, and she does know hexactly wot I are finking. Every day we do learn tiny, new fings about each other. It is called a partnership, and we have builded it by spending a lot of time together. So we do trust each other. I trust Mum to write down hexactly wot I are finking, and she trusts me to come in her general direction when she does call me. To be quite very actual honest, she is betterer at the writing down wot I are finking bit than I are ever going to be at the coming back quickerly part of the deal. But we’re working on it…

JB: You were rescued by Hounds First Sighthound Rescue, which is a bit confuddling to me. I was a racing greyhound what ripped a nasty hole in my leg and couldn’t race anymore, so they chucked me out like yesterday’s kibble, but how did a luffly boykin like you land in such a pickle?

WW: It was orrendous. When I was an ickle puppy Worzel Wooface, I was tried for somefing called “working.” Working means chasing and killing other creatures. I are quite very actual relieved to say that I. Was. Rubbish at it. But once the peoples did realise I was useless at that fing, I got nerglected and duffed up by other dogs.

It has tooked a lot and a lot of time for me to learn to trust peoples, but nowadays I are a bit betterer at not-being-worried-about-everyfing.

And then I didn’t just end up in a pickle. I ended up with a hole famberly of Pickles, cos that’s their name.

JB: Yer mum says she only uses “pawsitive reward based training.” What is that, and what do treats have to do with it?

WW: Pawsitive Reward Based Training is all about finding good fings that me and Mum can do together. It means I get treats and luffly good boykin words when I do somefing Mum wants me to do again. I does not know wot happens when I do somefing she doesn’t want me to do, cos Mum says she just hignores them fings or tries harder to remember to shut the larder door. And not leave her Kindle on the bed. Mostly, if I do somefing Mum isn’t keen for me to try again, she finds somefing betterer and more hinteresting for me to do. I don’t ever, hever get yelled at or yanked on my lead or smacked.

JB: My grandpa has an actual sailboat, just like your dad, but I would quite very actually prefer to have my toenails trimmed during a funderstorm than set foot on that floating deathtrap. Have you lost your marblebibbles?!

WW: I has still got all my marblebibbles, but most of the peoples I do live with losted theirs ages ago. Mum says I are A Nigma, and I are scared of the most redickerless fings sometimes—but not sailing.

The truth is probababbly that I are scared of lots of fings because of wot happened to me when I was a puppy, but because I did not do sailing when I was ickle, I did not know to be worried about it.

I was carefully hintroduced to the boat. I was allowed to get used to being on it without it moving at first, and then we did go for short trips and then longerer ones. My famberly always make sure I am looked after carefully on the boat, and we have lots of stops in hinteresting places where there is usually some fabumazing sniffs and smells.

JB: As another dog what is outnumbered by cats, do you have any actual advice for keeping them from stealing my very actual bed?

WW: That is a very easy-peasy question: Steal the hoomans’ beds! I have a hofficial bed, but I honly use it when the hooman bed is too hot and I want a cooler place to sleep. The rest of the time, the cats are quite actual welcome to it!

JB: Being a sellebberty dog sounds hexausting. How do you keep up your hennergee and find time to keep cats off your bed?

WW: Being a sellebberty can be hexhausting, but there is usually treats for me when I are out and about. I do have exerlent dinners, and I have fabumazing playtimes with my friends to keep me fit.

We honly do sellebberty stuff wot I henjoy, and Mum can be quite actual bossy about making sure I does not get too tired or have to deal with too many noo hexperiences. I spend most of the time asleep on Mum’s bed being an himportant part of my famberly.

JB: Two fabumazing books about Worzel Wooface isn’t nearly enuff. Are you quite very actually planning to write any more?

WW: I has just finished Three Quite Very Actual Cheers for Worzel Wooface, wot is going to be published in September. I does hope that everyboddedy luffs it. Every year, I do fink that there might be nuffink hinteresting to say, but then Fings Happen wot I do need to tell the world about. So long as Fings Keep Happening, I will keep writering.

I also did give Mum permission to write a book for children’s wot is about me, rather than by me. I fink she has dunned OK with it, and my friend Chantal did the pictures, wot are booful and look just like me!