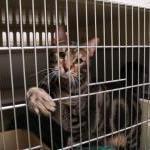 Prime Update: In response to PETA’s undercover investigation of animal experiments at the University of Utah and the complaint that we filed with U.S. Department of Agriculture (USDA), the U has been cited for nine violations of federal animal protection laws, including the following:

Prompted by complaints filed by PETA after our investigation, USDA representatives inspected the U and found exactly what our investigator had found: neglect, misery, and death in the animal laboratories. The school’s response: Tom Parks, vice president of research, called these incidents of abuse and mistreatment “relatively minor offenses.” Frightening, don’t you think? Imagine if this remark had been made in reference to deaths and neglect in a nursery for human babies! Parks’ casual attitude speaks volumes about exactly how animals are regarded by experimenters and others who have charge, custody, and oversight of animals in laboratories.

Of course, the USDA inspection does not include any incidents that we reported involving rats and mice because these animals are not protected by the Animal Welfare Act—the only federal law governing the treatment of animals in laboratories. Of course, rats and mice feel pain, fear, hunger, and thirst just as do all mammals, including humans.

While we follow up on the complaint that we filed with the National Institutes of Health, can we count on you, too, to get involved?

This post by Karin Bennett was originally published on The PETA Files.