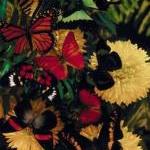 Several years ago, while working as the director of a local humane society’s summer camp, I had the “bright” idea to build a butterfly garden.  I thought that the kids would love planting the butterfly-friendly plants that were donated by a local garden shop and caring for the pupae and butterflies. I even went as far as building a screen pavilion in order to protect the butterflies from predators and give the animals a place to test their wings before they flew away.

While surfing the Internet, I found a company that sends butterfly “kits” through the mail. I ordered a few hundred butterflies in various stages of life—larvae, cocoons, and a few adult butterflies. I wasn’t sure what to expect, but I had this idea that the butterflies would arrive in an enormous box that had little holes in it, and the butterflies would be fluttering about inside until the box was opened and they could fly out. The company shipped the package overnight from a city that was only a three—hour car ride from my house, so I didn’t think much about the whole transaction.

Imagine my shock and horror when the butterflies that I ordered arrived in tiny, flattened envelopes, with their glorious wings flattened, and in a state of forced hibernation! While I stood with a gorgeous butterfly resting on my finger, I berated myself a hundred times over. Fighting for his life, I found a way to unfurl his tiny proboscis and watched as he sipped sugar water from a bottle cap, praying that this little fellow would make it. I can’t tell you how dreadful I felt at my own complicity in commodifying the life of such a beautiful being. When I discovered that some butterflies had arrived dead, I knew that I was responsible for their demise. Surely there must be a better way to teach children about the life cycle of an insect than to risk the life of a butterfly. Since then, I have made a pact that I will never purchase butterflies again and that I will try my best to educate everyone I can about the cruelty that’s involved in this industry.

It’s heart wrenching to think that this scenario is played out dozens of times a day all over the world to celebrate everything from a butterfly garden to a wedding—and everything in between.

White doves, for example, are specifically bred for release and used by thoughtless event planners. Because doves are flock animals, they have very little chance of surviving on their own when they are released at events. Sending white doves into the air after having kept them confined for their entire lives is tantamount to abandoning a household companion animal in the woods 10 miles from home and should be as illegal. The initial release confuses doves, especially if it’s done at night (when many celebrations take place). Doves are diurnal, so being exposed at night already puts them at a disadvantage. In the confusion of the moment, the birds dissipate and flounder into the night. Come morning, these doves are on their own. Unless they are lucky enough to find a flock of pigeons or other doves to join up with, they won’t survive. However, even if they do find other birds to hang out with, the disoriented doves will remain an easy target for hawks and other predators.

Butterflies, too, have a tough time surviving in a habitat that is not designed for them. They live in a variety of climates around the world, and when they are transported away from their natural habitats, they often cannot find food sources. Because of the seasonal nature of many butterfly species, some butterflies who are released face climates that they simply cannot survive in.

I would love to see people go back to the basics of celebration: music, carousing, and dancing in the streets. Is that so wrong?

To this day, I am sorry about my poor judgment at that summer camp. I hope that by sharing my story, I can educate even one person and convince them to not purchase butterflies and to speak out against butterfly and dove releases whenever they get the chance.

Like many PETA activists, I, too, am an animal rescuer. I have bottle-fed kittens and given tender, post-operative nursing care to wounded animals. But I hope that I never again have to hold a dying butterfly on my finger because I was careless with a credit card and a computer.

Do you have any creative ideas for celebrations that don’t involve animals?