If you look closely at Samson’s ear, you’ll see six letters, each tattooed over with an “X.” 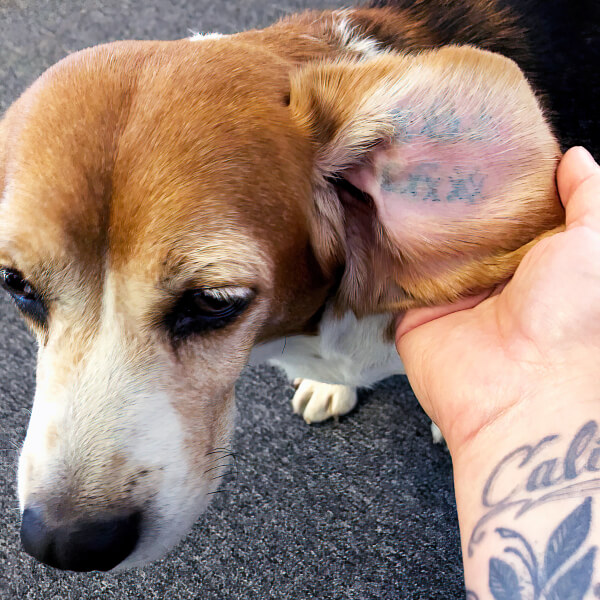 Not long ago, those letters were his only identification. He had no name, no bed, no toys, and no real life at all. His teeth were rotting, and he had an ear infection. For eight years, he wasn’t treated like a dog—more like a breeding machine—at Envigo, a massive beagle factory farm in Virginia that sells puppies to the National Institutes of Health (NIH) and laboratories around the world. Born and raised in this miserable prison, Samson sired an estimated 200 puppies, who were shipped off to endure painful, deadly experiments—to be poisoned, cut open, burned, and psychologically tormented.

A PETA investigator worked undercover at this facility, where almost 5,000 beagle dogs and puppies were confined 24/7 to barren cages in sheds the size of football fields. Denied any opportunity to run, play, and simply act like dogs—and deprived of a comfortable bed or a family to love them—the beagles paced, jumped, and barked frantically. The din of hundreds of distressed cries must have been unbearable for the dogs trapped there, given their extremely sensitive hearing. 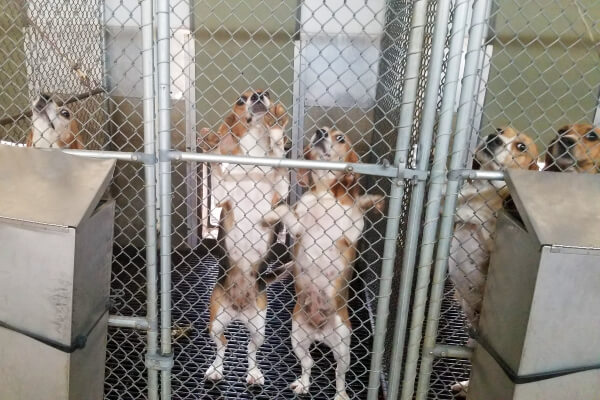 Samson wagged his tail whenever he saw PETA’s investigator but cowered when approached. Workers routinely blasted his and the other dogs’ cages with water from high-pressure hoses—even those of nursing mother dogs and their puppies, who were unable to move out of the way, leaving them soaking and traumatized. The workers tattooed puppies’ ears with needled clamps and no pain relief. Dozens of puppies were tattooed three times—first with the wrong number, the second time with an “X” over each mistake, and then again with the intended tattoo.

When dogs were sick or injured, lay workers guessed at the diagnosis and treatment. One supervisor inserted a needle straight into a puppy’s head in a crude attempt to drain fluid from a wound, again—without anesthetics. When the puppy wailed, the supervisor tried to hold her mouth shut. Workers cut prolapsed tissue from dogs’ eyes, stitched up dogs’ prolapsed penises, and even cut puppies out of their sedated mothers’ wombs (then killed their mothers).

The total number of dead puppies was actually even higher than that noted by PETA’s investigator: Some were inadvertently crushed to death by their mothers inside their cramped living space. Others were eviscerated, suffered from hydrocephalus (in which fluid builds up inside the skull and puts pressure on the brain), or simply couldn’t survive the harsh conditions.

PETA’s investigator found a puppy whose body was split open and had been left to rot over the weekend in a cage occupied by his mother and littermates. Other puppies died after falling through holes in the cages and ending up in drains, soaking wet and covered with fecal waste. Workers killed some puppies by injecting euthanasia solution directly into their hearts while they were conscious and could feel the needle penetrating the heart muscle—contrary to veterinary guidelines for euthanasia. Some workers didn’t bother to verify that animals were dead before shoving them into plastic bags.

US Department of Agriculture (USDA) inspectors told company management to feed the dogs through their last nursing day, but hungry mother dogs were routinely denied anything to eat during their final two days with their puppies—and a supervisor instructed workers to lie about it. 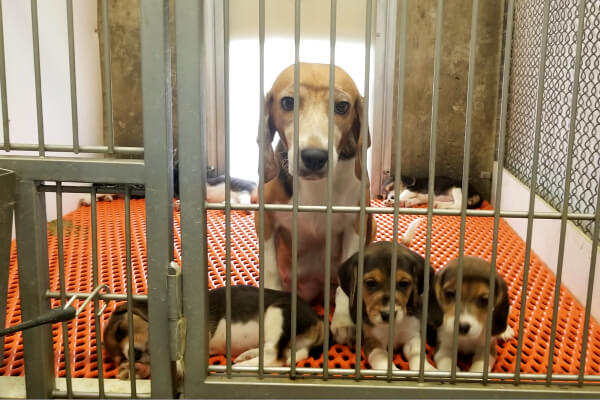 PETA took its evidence to the government, and USDA officials inspected the beagle supplier and opened a new investigation. In the meantime, the USDA released three damning inspection reports citing Envigo for 26 violations of the Animal Welfare Act from an inspection that took place in July while PETA’s undercover investigation was underway. Yet Envigo is still breeding and selling dogs today. More suffering awaits puppies who survive this hellish place. They will never set foot outdoors or experience time outside a cage except while being experimented on. And all their suffering and death is for nothing: A staggering 90% of basic research, most of which involves animals, fails to lead to treatments for humans.

PETA’s investigator found a legal way to get Samson out. Today, the brave old warrior is healing physically and emotionally as well as finally enjoying being a dog. 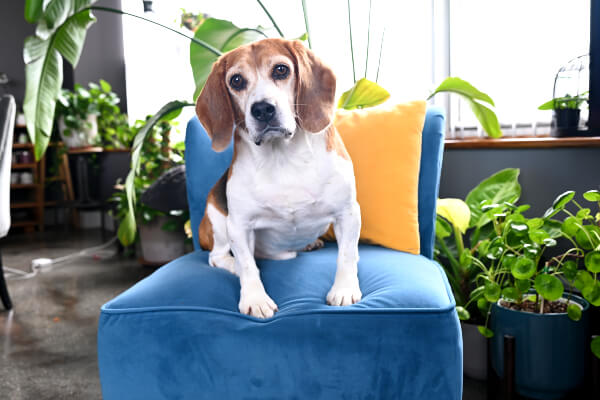 He chases leaves, watches birds and squirrels, and tries new foods. He sleeps soundly—until he barks in his dreams and wakes himself up.

PETA is determined to end animal experiments. It’s a long climb up a high mountain, but each year PETA gets gets closer to the summit. Please do your part for the sake of these and all dogs.

Share this article with everyone you know, and urge them to take action. US residents, visit PETA.org/Beagles to demand that NIH stop wasting your tax dollars on cruel and useless experiments that exploit beagles and other animals. Do you have what it takes to carry out undercover investigations like this one? PETA is hiring. Visit PETA.org/Investigator.