Had she been born in a field or a forest, Tulip —a little black mouse with large pink ears— likely would have spent a great deal of time foraging for tasty seeds, fruits, and grains and building elaborate burrows with rooms for storing that food, sleeping, and even going to the “bathroom.”

She would have fashioned a soft, cozy nest for her babies to sleep in.

But Tulip had never experienced these simple pleasures, because she was one of dozens of mice and rats housed in laboratories at the University of North Carolina–Chapel Hill (UNC). And like other rodents, she’s not protected in any way under the Animal Welfare Act—the only federal law governing the treatment of animals in laboratories.

UNC’s laboratories get millions of dollars in government funding, yet PETA’s investigation revealed that the money is used to make life unbearable for these vulnerable animals.

Our investigator watched in horror one day as an experimenter killed 23 mice, one after another, by breaking their necks with a metal cage-card holder. She saw another experimenter douse 8-day-old rat pups with ethyl alcohol and casually cut off their heads with scissors, as if he were making paper dolls, leaving their tiny bodies to writhe on a counter. Unskilled workers jammed glass pipettes into the corners of mice’s eyes, trying to draw blood but gouging some of their eyes in the process.

Rats—who are intelligent and can understand each other’s emotions by reading facial expressions— were put on a severely restricted liquid diet for two weeks or more in order to make them desperate enough to drink alcohol, which, of course, they would never do in nature. They were so hungry that they resorted to eating their own droppings. Our investigator came across one emaciated rat who was actually foaming at the mouth—an experimenter guessed that this was because he had become drunk, eaten his bedding, and choked when it swelled in his throat.

Even though our investigator repeatedly requested that sick and injured animals be provided with veterinary care, they were left to endure prolonged, painful deaths. One rat suffered for 25 days with an enlarged abscess because staffers mistakenly believed that she was pregnant. Eventually, she was put out of her misery. Conditions inside the laboratory were so horrendous that it was considered “normal” to see mice who had implants breaking through their skin and rats with huge sores and oozing scabs around devices that had been implanted in their skulls.

Mice are devoted parents who will bravely stand up against predators to save their babies, but in this UNC lab, conditions were so crowded that newborns got trampled, suffocated under the bodies of their cagemates, or starved to death because they couldn’t reach their mothers in order to nurse. They were also routinely deprived of food and water and sometimes even thrown into the “dead-animal cooler” while they were still alive.

As tempting as it was just to scoop up all the suffering animals and whisk them away from this dark, hopeless place forever, the investigator understood the importance of carefully documenting and then exposing the abuse that they endured. Armed with damning video footage and detailed notes, PETA filed a formal complaint with the National Institutes of Health, and cheers went up when the agency agreed that the experimenters had been improperly trained, caused animals pain and distress, and committed many other violations.

And while, unfortunately, the investigator couldn’t save all the animals, she was able to rescue Tulip and give her a permanent and loving home. 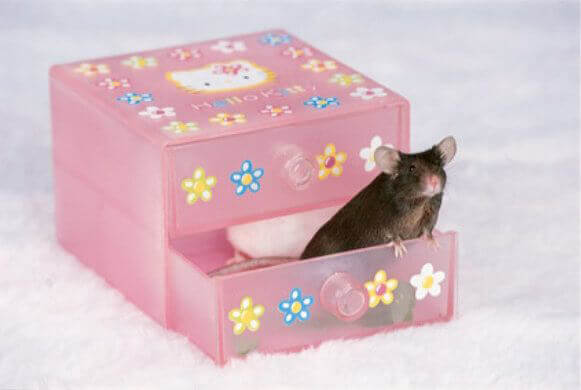 PETA is working toward a day when no animal— even the smallest and most vulnerable—is treated like disposable laboratory equipment. As for little Tulip, once she knew that she was safe from her former life of fear and suffering, she blossomed.

You can help mice like Tulip—along with dogs, cats, rabbits, and other animals condemned to suffer in cruel experiments—by making a gift to PETA’s Animals Out (of the Labs) Matching-Gift Challenge today. Every donation will be matched dollar for dollar, doubling your impact on our vital work to stop animal experiments.