The support of our members is helping PETA make progress for all animals, including bears used for entertainment. PETA is working to improve the minimal standards of care for bears and to move them to appropriate sanctuaries. As a result of our work over the past three years, 41 bears have been rescued from dismal roadside zoos, tiny backyard pens, or circuses and sent to sanctuaries. 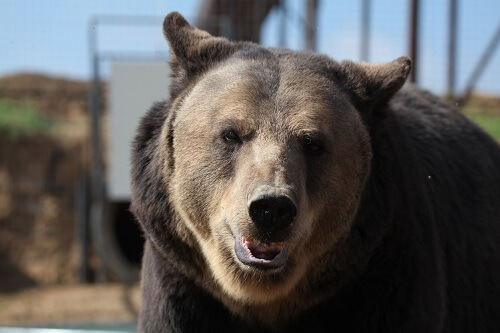 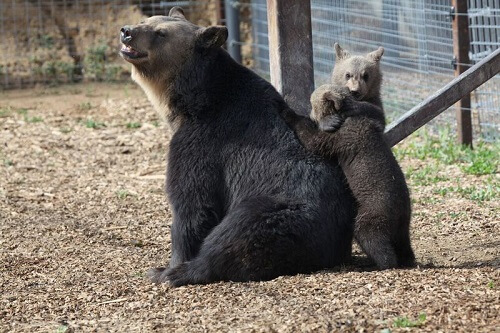 Among those rescued is Fifi, one of four elderly bears who each lived all alone inside a tiny pen at a Pennsylvania roadside zoo that had closed its doors in 1995, leaving the animals unable to set foot outside the cages for the next 20 years.

As you may know, PETA funded the bears’ transport to their new home at Colorado’s Wild Animal Sanctuary last fall. At 30 years old, Fifi had difficulty walking and suffers from severe arthritis in her hind legs. But despite her mobility challenges, the moment that the door of her transport cage opened, she made a beeline to the tub that awaited her. Because her opportunities to bathe had been rare or non-existent for decades, the amount of dirt that washed off her was astounding—it must have felt so good finally to get clean.

In the ensuing months, Fifi has made a marked improvement, thanks to the benefits of veterinary care, natural surroundings, room to walk around, and a specially built ramp that enables her to enter her large pool easily. She has gone from being underweight and arthritic with a patchy coat to being big, strong, and beautiful.

Here’s a video of her stunning transformation:

While we work to free even more bears from cruel captors, we’re also pressuring the U.S. government to make vital improvements to the standards for their living conditions at zoos and other exhibitors.

Bears are intelligent, curious, and energetic. In their natural habitat, they enjoy digging, constructing dens, climbing, rolling in leaves and grass, and foraging for berries and other treats. But a PETA review of federally licensed bear exhibitors in the U.S.—including those of which PETA has released video exposés—revealed that more than 1,000 bears are kept in conditions that prohibit most or all these types of behavior.

For instance, at certain roadside attractions, bears are kept in concrete pits with nothing to do but stare up at tourists who toss them food when they “beg.”

Some of the animals are so stressed by their confinement that they gnaw at metal bars, seeking a way out—and break their teeth in the process.

But there is hope for them. In an attempt to outlaw keeping bears in concrete pits as well as other abuse, PETA filed a petition with the U.S. Department of Agriculture (USDA), which enforces the Animal Welfare Act (AWA), to request that the agency require that facilities with bears take the animals’ specific needs into consideration—for instance, by providing them with opportunities to forage, nest, and den.

Sadly, the USDA delayed opening the petition for public comment for more than a year and sought such comment only after PETA filed a lawsuit over the delay. After all 8,729 public comments were received and tallied, 99 percent were in favor of bear-specific standards.

To our delight and surprise, the Association of Zoos & Aquariums (AZA) supported our petition. For decades, it was a safe bet that no matter what PETA said—whether “two plus two equals four” or “the sky is blue”—the AZA would argue against us. So to have the organization’s support for our position is a huge sign of progress for animals.

Although federal agencies move at a glacial pace, the USDA is finally moving forward. And although it has declined to adopt bear-specific regulations, the agency recently announced that it will issue new policy statements, factsheets, technical notes, and training sessions to ensure that bears are finally better protected under the general guidance of the AWA.

PETA will keep pushing for the rescue of all bears from concrete pits and other abusive facilities. Approximately a dozen miserable bears are confined to virtually barren concrete pits at the Cherokee Bear Zoo in North Carolina. You can help close this cruel animal prison by urging the owners to release the bears to a reputable sanctuary. Please call Cherokee Bear Zoo owners Barry and Collette Coggins at 828-497-4525 or send a letter to: