That’s me, hanging in a meat market in London one cold morning to make a point: that pigs aren’t that different from “us.” They’re flesh – the same color as me in fact – and they are full of feelings, as you and I are. And, like us, they don’t want to die.

Thinking that they’re doing the right thing, well-meaning shoppers buy meat, milk, and eggs with positive-sounding labels like “freerange,” “humane,” and “cage-free.” However, as PETA investigations have proved – and the pigs beside me found out – “humane” meat is a lie.

At Whole Foods and other grocery stores, you’ve probably seen signs posted at the meat counter saying things like “high standards of animal welfare.” Well, it turns out that “high” is a highly subjective word. A PETA undercover investigation into a Pennsylvania pig farm that supplied Whole Foods revealed that such claims are unlikely to be worth the paper they’re printed on. The pigs PETA’s investigator filmed were never even given the opportunity to walk through the grass. They spent almost every minute of their bleak lives in crowded sheds with concrete floors. Each pig had roughly 5 square feet (less than 1/2 square meter) of space. Typically, the only time they ever went outside was when they were prodded from one shed to another or struck and goaded by workers onto a truck bound for slaughter. 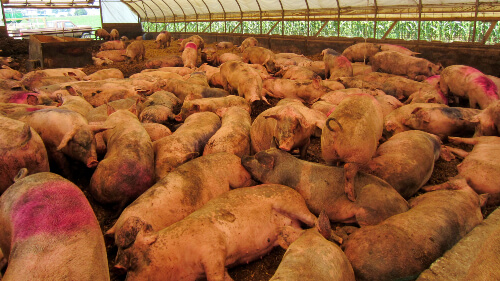 Shoppers who go out of their way to choose a carton of “cage-free” eggs have (cruelly produced) egg on their face. In 2019, PETA Foundation attorneys filed a historic lawsuit on behalf of consumers who were misled into buying Nellie’s “free-range” eggs by pictures of hens enjoying lush, grassy fields. A PETA eyewitness observed a very different situation. At one Nellie’s egg supplier, nearly 20,000 hens were crammed into a crowded shed with just 1.2 square feet (0.1 square meters) of floor space each and a few tiny escape hatches that – even if the birds could reach them and they were open (which they often weren’t) – only offered hens access to a narrow strip of grass and dirt. The lawsuit opened the door for consumers to sue over similar advertising, but as of this writing, Nellie’s continues to make misleading claims. So, buyer beware! You may be paying for fake assurances and real suffering. 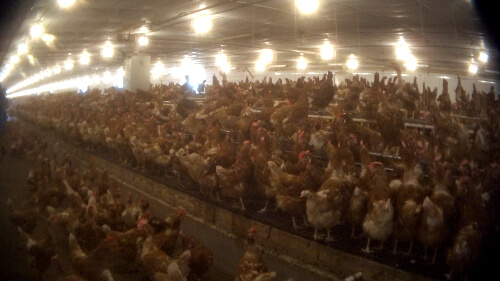 There’s nothing the least bit kind about factory farming, transport, and slaughter. Making some marginal improvement in animals’ wretched lives does not absolve anyone of participating in a hideously cruel enterprise when they buy animals’ flesh or secretions. Perhaps animals are given a few more inches of space. Perhaps they are kept in stalls with enough room to turn around. Maybe their beaks aren’t seared off with a hot wire. But the rest of their lot in life is still an abomination. Yes, kicking a dog six times a week instead of seven is an improvement, but wouldn’t it be better if people didn’t kick dogs at all?

Endorsing grossly misnamed “humane meat” supports an industry that brings animals into the world solely for human purposes – causing them stress, trauma, and suffering, only to culminate in the fear and pain of the slaughterhouse. If that is so humane, why not take the kids to a factory farm and make a day of it? Because it isn’t humane – that’s why.

PETA believes that animals are not ours to eat. They are just like us, with hearts, minds, emotions, and desires.

The momentum for vegan living is here. Let’s actively reject the fallacy of humane meat. There is no such thing: The truth is that “humane meat” is a nightmare for animals, the Earth, human health, and every living being. It has to go!

Humane Society International, the American Society for the Prevention of Cruelty to Animals (ASPCA), and Compassion in World Farming (CIWF) should hang their heads in shame or change their names to remove “humane,” “prevention,” and “compassion” from them. They are all major partners of the Global Animal Partnership (GAP), as are factory farmers – and together, they are certifying animal welfare “standards” that fail to prevent hideous treatment of animals. Consumers are being misled, and animals are suffering mightily.

If a factory farm has a GAP certification – such as base, step 2, or step 3 – it receives announced audits only once every 15 months. And even if a farm is found in violation of these lax standards, it gets to keep its label while it is given time to make changes.

GAP actually certified turkeys at Plainville Farms as being “handled in a way that does not cause injury” at the same time that PETA was documenting workers kicking, punching, and stomping on birds, as well as using them as living props in simulated sex acts. GAP’s certification program is meaningless and legitimizes the cruelty inherent in factory farming. PETA has written to all three animal welfare organizations and asked them to sever ties with the GAP organization, but they all stand fast!