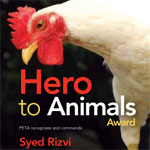 If all caring people were as energetic, fearless, and enterprising as Syed Rizvi, one of PETA’s founding members, animal liberation would have been achieved a long time ago!

As a physicist, Syed founded a group called Engineers and Scientists for Animal Rights, which was an important and early voice for lending support and professional credence to a new movement. Syed’s outspoken advocacy against raising animals for food, vivisection, and cruelty in the name of religion has inspired people worldwide, including in his native country of Pakistan. He has been a leading voice for animal rights in the Muslim community. When PETA India was first launched, Syed was one of the first to jump in to help translate our publications. When we needed him, he was there. Whenever animals are in trouble, he is there. 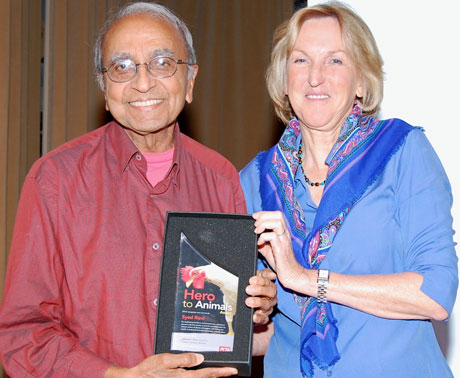 When he’s not rescuing cats, his fingers are flying over the keyboard writing articles and letters on a plethora of issues, including the suffering of Australian sheep who, after their wool production has declined, are packed off to the Middle East by the tens of thousands and crammed onto open-decked ships for horrific journeys to meet a grisly end in a slaughterhouse.

Syed credits his vegan diet with helping in his recovery from cancer—and he serves as a powerful example of the benefits of keeping milk, meat, and eggs off our plates.

Syed deserves many accolades and enormous thanks. As a token of our sincere appreciation, he has been given PETA’s Hero to Animals Award. We are truly grateful for his activism, his warmth and compassion, and his ability to inspire us and others around the world.