“[It] could be considered a form of torture.”

That was veterinarian Dr. Pratikshya Patil’s assessment after she saw photographs showing how Amazon parrots Captain and Stevie were forced to “live” at Great Pets—an Ohio breeding operation that supplies animals to the pet trade, including the global pet store chain Petland. 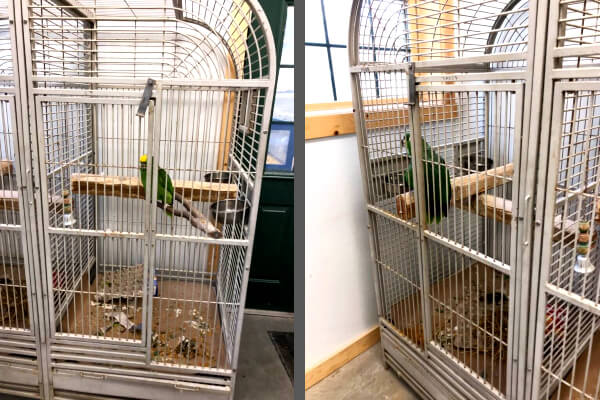 Captain (left) and Stevie (right) were kept in barren cages with little to no enrichment.

Parrots are highly intelligent individuals who need flight, socialization, companionship, toys, and puzzles to stimulate their minds. An eyewitness who worked at Great Pets discovered that Stevie—whom a worker said was 70 years old—and Captain were kept separated in a barren cage and rarely let out to stretch their wings. The only “enrichment” they received came in the form of discarded trash that workers threw into the cage. When the birds called out, a worker said to ignore them—which is the same as turning your back on a toddler who asks a question. Captain and Stevie were also denied the different-sized perches necessary to keep their feet healthy.

Before opening Great Pets, the owner—who has a history of federal Animal Welfare Act violations—trained and provided animals for circus-style shows, such as those at SeaWorld. Workers said that Captain and Stevie were once used in animal acts and that they had become “something of an afterthought” since they were no longer being used as moneymaking breeding machines.

Captain and Stevie weren’t the only animals whose basic needs were ignored at Great Pets. Learn more about what PETA discovered, and please sign and share our action alert.