“Yoga reminds us that all of life is sacred, that all of life is connected, and that what we do to another we eventually do to ourselves,” writes Sharon Gannon in her new book, Yoga & Veganism: The Diet of Enlightenment. As we struggle to cope with a world that has been turned upside down by the novel coronavirus—likely unleashed because humans treat other animals not as sacred but as commodities to be caged, killed, and consumed—the message of Gannon’s book could not be timelier. Moreover, if we want to prevent more pandemics and even more devastation, it’s a message that we must take to heart. 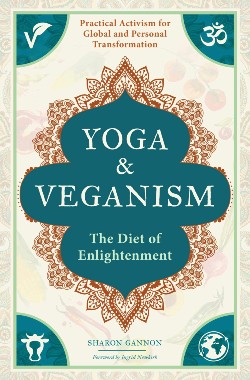 Gannon, who is the cofounder of Jivamukti Yoga, takes as her starting point Patañjali’s Yoga Sūtras, the earliest known text to present the philosophical and ethical components of yoga. The goal of yoga is enlightenment, “a state in which the separateness of self and other dissolves in the realization of the oneness of being,” and Patañjali offered yogis pragmatic methods to help realize that goal. In Yoga & Veganism, Gannon focuses on the yamas, or restraints, five ethical principles that are meant to guide us in relation to other living beings.

“Patanjali says that as long as you still perceive ‘others’ and not one interconnected reality, then (1) don’t harm others, (2) don’t deceive them, (3) don’t steal from them, (4) don’t manipulate them sexually, and (5) don’t be greedy, selfishly depriving them of sustenance and happiness,” writes Gannon.

That seems straightforward enough, but how do we put this into practice? Gannon suggests that we start by looking at what’s on our plates.

If our aim is to practice ahimsa, how can we consume the flesh of animals who valued their lives and didn’t want to die? Anyone who’s been to enough yoga classes has surely heard about India’s “sacred cows,” but as Gannon explains, cows in today’s society are not treated with reverence. On dairy farms, workers restrain and forcibly impregnate them (violating brahmacharya) and tear their beloved calves away from them shortly after birth so that their milk can be used by humans (violating asteya). Hens are also sexually exploited so that humans can steal their eggs. They’re crammed together in wire cages, where they never see the light of day and can’t spread a single wing, yet we grow up believing in the myth of “happy” farms, where fluffy yellow chicks explore lush meadows while their doting mothers look on (a falsehood that violates satya). In short, yogis seeking liberation should always be mindful that it doesn’t serve their purpose to continue supporting industries that rob other sentient beings of their own freedom—and their very lives (in violation of aparigraha).

The discussion of these five important principles and their relevance to our lives today is at the heart of Yoga & Veganism, but Gannon also offers readers some of her favorite vegan recipes (for more of these, see her cookbook, Simple Recipes for Joy), an extensive FAQ section addressing everything from nutrition to spiritual activism, and inspiring stories by people who changed their lives by going vegan (including PETA President Ingrid Newkirk, who also wrote the book’s foreword). Yoga & Veganism is an important book, rich with ancient teachings that have newfound meaning during our current health crisis—and we have two copies to give away!

For a chance to win a copy of Yoga & Veganism, just leave a comment on the PETA Prime Facebook page before June 4, 2020 telling us why you’re ready to liberate your plate. Two PETA Prime readers will be selected at random to win—good luck!