“Go home, kitchen bitches!” That’s the banner that shooters in Hegins, Pennsylvania, unfurled as they sneered at the 2,000 mostly female animal advocates arriving to protest the annual pigeon shoot. It was 1992, and 5,000 birds had been trapped and confined to small cages for two days without food or water so they could be catapulted into the air and gunned down mostly by men.

As the shooting began, a group of 40 people led by PETA President Ingrid Newkirk stormed the field, freeing as many birds as possible before they were arrested. 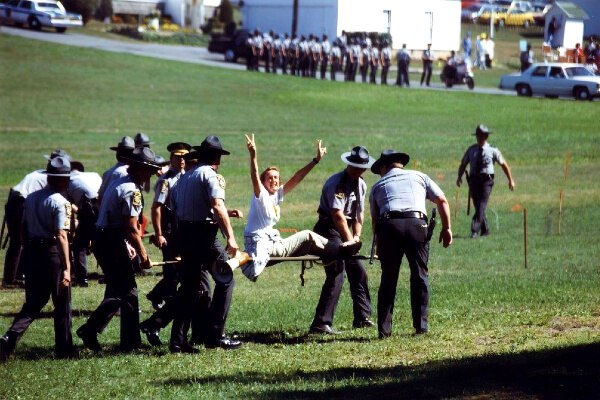 Rather than paying bail, every woman chose to remain in jail for 15 days, to cost the town money, despite sexual harassment and ill treatment. The women did the same thing the following year. Eventually, the disgusting event got canceled.

At Pamplona’s Running of the Bulls, the terrified animals are harassed and chased through the town to a bullring by men eager to show off their machismo. After the stampede, the confused bulls are stabbed to death in the arena. During these testosterone-fueled days, many sexual assaults are reported.

PBS has published accounts of sexual abuse from numerous women working on meat, dairy, and egg farms – all industries built on the subjugation and exploitation of female bodies. At DeCoster Farms in Iowa, female pigs are imprisoned in gestation crates after workers shove tubes of semen into their vaginas, and the reproductive cycles of hens, who are forced to live in crowded wire cages, are manipulated to get them to produce more eggs. The company has also paid millions in fines for cruelty to animals and $1.5 million more to a stream of female employees who reported being raped. PETA investigations in such places often reveal that male workers have criminal records of spousal abuse.

Throughout history, women and animals have been denied basic rights and subjected to cruel, demeaning treatment – all of it “justified” by ascribing to them an inferior status. “They’re just women.” “They’re just animals.” Their roles have been established and they’re expected to comply: “wife,” “mother,” “homemaker,” “sandwich,” “draft animal,” “test tube.” Those who resist are often punished.

Women are in a unique position to understand animals’ plight and to change it, and that’s what they are doing. The organizers of the first Women’s Rights Convention in 1848 were also predominantly ethical vegetarians. As Quakers, they believed in equality, abolition of slavery, and animals’ rights. They founded the Friends Vegetarian Society and Quaker Concern for Animals. Congregant Anna Sewell wrote the groundbreaking Black Beauty, and Susan B. Anthony was the first woman and only vegetarian to be immortalized on American currency. Quaker and suffragist Caroline Earle White founded the first state SPCA, in Pennsylvania, and the American Anti- Vivisection Society (AAVS). The female-dominated AAVS challenged the predominantly male medical profession, stating that doctors couldn’t learn to treat humans by tormenting animals.

British feminist Frances Power Cobbe spoke out about the similar oppression faced by women and animals, and English suffragists began to demand an end to the fashion industry’s cruelty and to animal experimentation, leading to the UK’s modern animal rights movement. 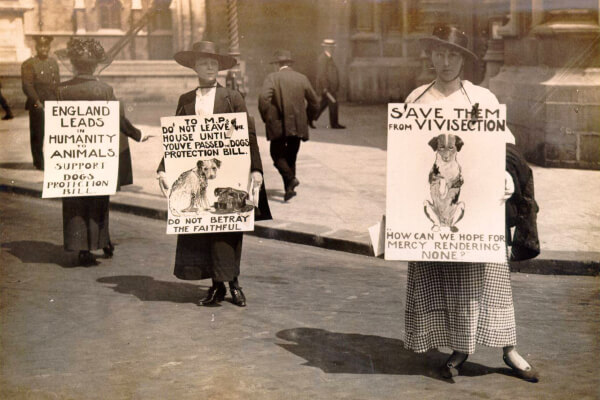 Rosa Parks and Coretta Scott King were both vegetarian, and people of color are now the fastest-growing group of vegans. Presidential Medal of Freedom recipients Dolores Huerta and the late Cicely Tyson always made it clear that women’s rights, civil rights, and animal rights are inextricably linked. PETA, which is run predominantly by women, has achieved countless victories for animals. And strong, outspoken women continue to lead the charge for the ethical treatment of animals, from Gloria Steinem and Joan Jett to Lizzo and Greta Thunberg.

Betty Friedan asked, “Who knows what women can be when they are finally free to become themselves?” Science and common sense tell us that female animals, too, desire freedom. We must defend the right of every female to be free.