The truck carrying this cow was unloaded at Walton Stockyards in Kentucky one September morning. After the other animals were removed from the truck, she was left behind, unable to move. The stockyard workers used the customary electric prods in her ear to try to get her out of the truck, then beat and kicked her, but she still didn’t move. They tied a rope around her neck, tied the other end to a post in the ground and drove the truck away. The cow fell to the ground, landing with both hind legs and her pelvis broken.

For the first three hours, she lay in the hot sun crying out. Periodically, when she urinated or defecated, she used her front legs to drag herself to a clean spot. She also tried to crawl to a shaded area but couldn’t. Altogether, she managed to crawl a painful 13 to 14 yards. The stockyard employees wouldn’t give her any water – the only water she received was given to her by Jessie Pierce, a local animal rights activist, who had been contacted by a woman who witnessed the incident. Jessie arrived at noon. After receiving no cooperation from stockyard workers, she called the Kenton County police. A police officer arrived but was instructed by his superiors to do nothing. He left at 1 p.m.

The stockyard operator informed Jessie that he had permission from the insurance company to kill the cow but wouldn’t do it until Jessie left. Although doubtful that he would keep his word, Jessie left at 3 p.m. She returned at 4:30 p.m. and found the stockyard deserted. Three dogs were attacking the cow, who was still alive. Jessie contacted the state police. Four officers arrived at 5:30 p.m.

State Trooper Jan Wuchner wanted to shoot the cow but was told that a veterinarian should kill her. The two veterinarians at the facility would not euthanize her, claiming that in order to preserve the value of the meat, she could not be destroyed. The butcher eventually arrived at 7:30 p.m. and shot the cow. Her body was purchased for $307.50.

When the stockyard operator was questioned by a reporter from The Kentucky Post, he laughed throughout the interview and stated, “We didn’t do a damned thing to it.” He referred to the attention given the cow by humane workers and police as “bullcrap.” 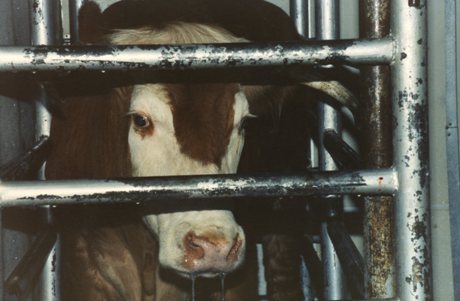 This is not an isolated case. It is so common that animals in this condition are known in the meat industry as “downers.” The only way to ensure that animals don’t suffer for our food is to adopt a healthy, humane vegan diet.

Dogs should never be left chained outside. Meet some of the ones PETA has helped recently.

Let’s Look at the Big Picture This World Vegan Month

This World Vegan Month is a good time to reflect on all the reasons to go vegan.

The meat industry and the agency entrusted with regulating it continue to fail animals miserably. The best way to prevent...

Experts agree with PETA: Cows abused by the dairy industry suffer even more than cows in the meat industry do....