With the help of kind supporters, PETA has made truly monumental progress for animals used for entertainment.

Our history of success goes all the way back to the 1980s, when our exposé of nightclub entertainer Bobby Berosini eventually led to the end of his orangutan-beating career—by stopping his use of orangutans entirely. Since then, we’ve won victory after victory. Most recently was a promise by Ringling Bros. and Barnum & Bailey Circus—in the wake of our protests and pressure, including revealing that many captive elephants are carrying the human strain of tuberculosis—to take elephants off the road by May 2016, which is a year and half earlier than previously announced!

Uno is unlucky enough to be owned by Hollywood animal trainer and Bowmanville Zoo owner Michael Hackenberger, who also owns one of the tigers used in the movie Life of Pi. Like all tigers who are forced to perform for people’s amusement, Uno has endured violent beatings.

In the video, Hackenberger says, “I like hitting him in the face. And the paws … being on the rock, when you hit him, it’s like a vise. It stings more.”

He even admitted that such beatings would cause public outrage if exposed, ironically saying into our hidden camera, “If … we’d been running a videotape … of the times I struck this animal … PETA would burn this place to the ground.”

Hackenberger has learned how to inflict pain with a variety of devices. As he holds a rigid plastic stick used to serve chunks of meat to the animals, a wolf who’s just out of the camera’s view cowers in fear, his eyes on the stick that he must know so well. Hackenberger explains to our eyewitness, “You smack ’em and they generally fold like a house of cards. … And that’s the beauty of these things.”

The good news is that our exposé has received more than 1.8 million views, and more than 50,000 people have signed our online pledge never to attend any event that involves forcing animals to perform.

Amazingly, Hackenberger unwisely posted a video response on his zoo’s website in which he gives absurd explanations for his actions and demonstrates a warped perception of his relationship to Uno. He seems to believe that when Uno does something that Hackenberger doesn’t want him to do—such as jumping on the “ring curb” or hesitating—Uno is choosing to act immorally.

Hackenberger explains his belief that whipping Uno is “rational behavioral management for the betterment of this animal.”

But PETA is making progress! The CBS TV show Zoo has canceled its plans to hire Hackenberger after seeing PETA’s video.

It’s a perverse perception of the roles of humans and animals and one that clings to the false notion that humans should be able to have absolute domination over all other forms of life—a common belief among “performing”-animal trainers. Orangutan-beater Berosini held a similar view, telling the court that the abuse he doled out was nothing more than what a parent would do to get the attention of a misbehaving child in a supermarket. But if a parent treated a child that way in public, the child would be taken into protective custody and the parent criminally charged.

Fortunately, our supporters are helping us relegate this mindset to the history books and put these types of trainers out of business. For example, last year Bill Cunningham, who produces Shrine circuses in 100 different cities, joined PETA for a news conference to announce that he’ll no longer produce shows featuring tigers, elephants, or other wild animals.

PETA is also making tremendous progress for chimpanzees who are mercilessly exploited by the entertainment industry. As a result of PETA’s work, the majority of the top advertising agencies worldwide—including BBDO, DDB Group, J. Walter Thompson Worldwide, McCann Worldgroup, Ogilvy & Mather, and Grey Group—have now signed our “Great Ape Humane Pledge,” stating that they won’t use chimpanzees or other great apes in their work. Since PETA’s outreach to advertising agencies about great apes began in 2008, almost every single commercial featuring a great ape has been pulled, and numerous companies—including Pfizer, AT&T, Verizon, Dodge, and Capital One—have banned the use of great apes in their ads.

PETA has also helped send many solitary chimpanzees from roadside zoo hellholes to beautiful sanctuaries, but there are many more who still need our help. For example, a chimpanzee named Joe is being kept alone in a barren enclosure at a seedy roadside attraction in Alabama called The Mobile Zoo. The facility has been cited by the U.S. Department of Agriculture for allowing visitors to throw peanuts at him, causing him to lash out in response. Joe spent his early years in the entertainment industry, where he was most likely taken from his mother as an infant and forced to perform cheap tricks for the camera. When he was 10 years old, his trainer dumped him at The Mobile Zoo, where he has languished in almost complete isolation for the last 16 years. Please speak up for Joe today by contacting The Mobile Zoo at [email protected] and politely asking that Joe be released to a reputable sanctuary. 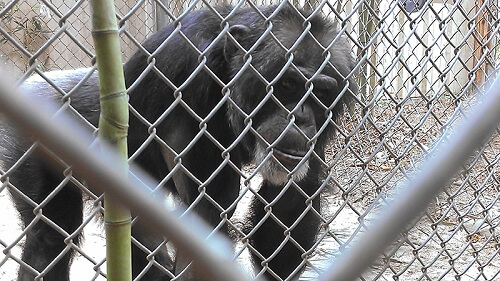 Joe at The Mobile Zoo

The tide is truly turning for animals used for entertainment. Thank you for helping PETA create a society in which animal acts are a thing of the past.