Attention, marathoners, mall walkers, couch potatoes, and cheerleaders: We hope you’ll all join the 2014 PETA Pack and walk, swim, jog, or run to raise money for animals. Last year, the PETA Pack, which included more than 500 participants from coast to coast and around the world, raised more than $96,000 to expose and end cruelty to animals.

This year, the pack wants to do even better, and that’s where you come in.

It doesn’t matter if you get winded walking to the mailbox—we want you on the team. PETA Pack Walking Coach Steve Kehrli, our development director, will specifically support anyone who wants to walk—or stroll. After all, it’s how you finish, not how fast you get there, that counts, and we have to be in for the long haul for animal liberation!

Virtual training starts on August 3, and the schedule includes easy, intermediate, and advanced options, so you can choose whatever’s best for you.

When you join the team, you’ll not only get three months of virtual coaching but also an official PETA Pack T-shirt to wear on race day and your own personal fundraising page so that you can raise money for PETA’s Investigations and Rescue Fund, which is, after all, the most important part.

But you’ll also have the chance to win cool prizes and awards and to get into the best shape of your life. Check out how energetic and healthy Elaine Hodge, a 2012 PETA Pack participant, looks! 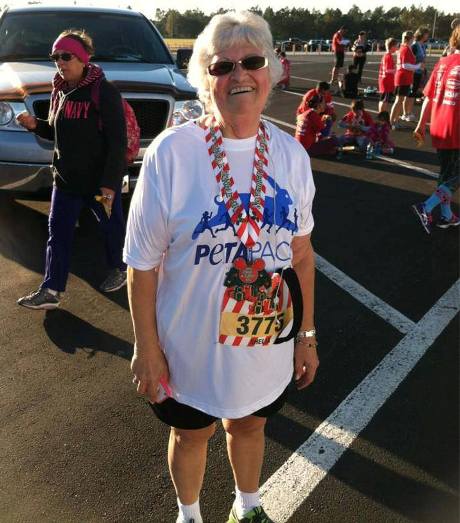 Vegan triathlete, author, and all-around inspirational guy Brendan Brazier is back as the PETA Pack spokesperson this year, so we’ve also got you covered if you want to run, ride a bike, or swim the English Channel. (OK, well, maybe not that last one. But participating in a swim event as a PETA Pack team member is a great option!) Heck, if you’re up for it, this year’s featured race is the U.S. Half Marathon.

Whichever event you choose, you’ll get the great feeling that comes from knowing that you’re helping animals as well as a summer of fitness, friendship, sport, and solidarity.

So are you in? Then join the PETA Pack today. Of course, if you want to help animals but prefer to leave the sweating to others, you can always sponsor a PETA Pack member.