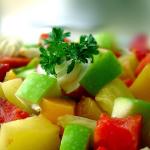 In encouraging news, a recent large-scale study from Loma Linda University suggests that vegetarians live longer than meat-eaters. Researchers used questionnaires to track more than 73,000 Seventh-day Adventists for nearly six years. They then followed up to find out how many of the study participants had died and from what causes. They found that the vegetarian (and mostly vegetarian) participants were 12 percent less likely to die prematurely than those who ate meat regularly.

Although the researchers were quick to point out that the vegetarians were also more likely to exercise and less likely to smoke or drink in excess, they attributed their findings mainly to the participants’ food choices. Vegan foods are cholesterol-free and generally higher in fiber and lower in saturated fat. Many vegan foods also contain cancer-fighting phytochemicals and antioxidants.

Previous studies, including one involving about 30,000 Seventh-day Adventists, have also indicated that people who eat healthy vegan foods live longer than meat-eaters. The key word there is “healthy.” Some cookies and potato chips are vegan, but that doesn’t mean they’re good for you. If you really want to reap the benefits of a plant-based diet—a slim waistline, low cholesterol and blood pressure levels, increased energy, and protection against heart disease, diabetes, strokes, cancer, and even Alzheimer’s disease—you should eat a variety of fruits, vegetables, nuts, seeds, whole grains, and soy foods.

Many plant-based foods, including kale, spinach, avocados, tomatoes, tofu, garlic, carrots, orange-colored melons, berries, and beans, even have special health benefits and age-defying properties. That means that there’s always an easy way for you to improve your health—just add more of these foods to your diet.

Of course, our lifestyle choices are all interconnected. Even a vegan who eats well but doesn’t exercise or get enough sleep or who smokes or is under a lot of stress won’t be as healthy as he or she can be. If you want to be at your peak, you need to maintain an overall healthy lifestyle, one that includes nutritious—and delicious—vegan foods rather than meat, eggs, and dairy products.

To increase your life expectancy and your quality of life, try incorporating these wholesome super-foods into your meals.