This article was originally printed in PETA’s Augustus Club newsletter for our legacy society members.

Leave a Legacy for Animals

“Clever as a goat.” That’s not a common expression, but perhaps it should be, because goats are smart. In one study, they demonstrated the ability to break into a sealed box using levers. And they can remember that skill four years later without prompting.

They also form strong social bonds with one another, as well as with humans. These highly inquisitive animals thoroughly explore anything new in their surroundings, and if you type “goats playing” into YouTube’s search engine, the proliferation of videos that turn up is a testament to their high-spirited nature. To add to their charm, they also take a cue from dogs (or perhaps it’s the other way around) and wag their tails to communicate their emotions.

Female goats are patient, extremely nurturing mothers who have even been willing to foster orphans of other species. 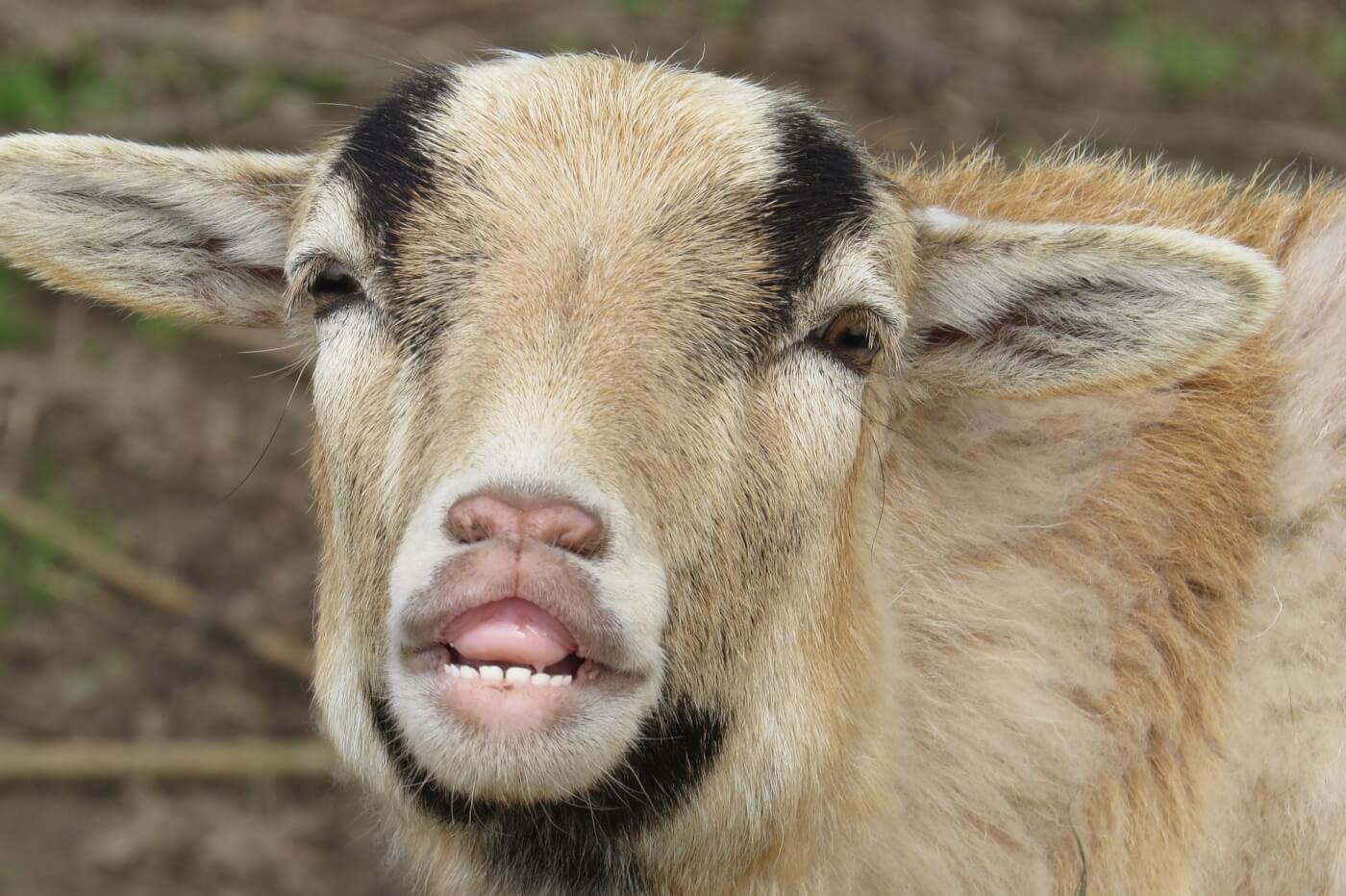 Like all animals, goats deserve respect and compassion.  Yet they are exploited in almost every conceivable way.  Here’s how PETA is working to stop their abuse.

Misery for Mohair
Mohair is a fabric or yarn made from the hair of angora goats. Even if shearing were done gently and carefully, it would still be extremely stressful to goats, who are prey animals and therefore terrified of being pinned down, completely defenseless. So you can imagine how traumatizing it is for them when they are shorn roughly and carelessly, which—as a disturbing new PETA video exposé reveals—is the standard operating procedure in the industry.

Our exposé—the first of its kind—shows abuse that took place on not one or two but a dozen angora goat farms in South Africa, the world’s top mohair producer.

Shearers left goats cut up and bleeding from the face and ears, cut off swaths of skin, and crudely stitched up wounds without any pain relief. Robbed of their natural insulation, many died of exposure. One man said that up to 80 percent of goats die after shearing on some farms.

With the support of our Augustus Club members, we are using this exposé to decimate the cruel mohair industry. PETA entities worldwide have persuaded more than 310 companies to ban mohair, including Anthropologie, Columbia Sportswear, Forever 21, Gap Inc., H&M, Overstock.com, Topshop, UNIQLO, Zappos.com, and Zara.

Cut Up and Killed in Trauma Training
After PETA released video footage from a military whistleblower showing U.S. Coast Guard medical training drills, a media frenzy broke out. Millions of viewers watched in horror as instructors used tree trimmers to cut the limbs off live goats, stabbed them, and pulled out their internal organs—while their kicks and moans clearly indicated inadequate anesthesia.

Since then, we have persuaded the Coast Guard to become the first U.S. military branch to end the mutilation and killing of goats and other animals in trauma training drills and to start using state-of-the-art human-patient simulators. We have eliminated about 95 percent of all animal use in military training in the U.S., with only “black ops” remaining.

We have presented studies to the U.S. Congress showing that physicians receive better training with simulators that mimic human physiology and that allow trainees to repeat procedures until they achieve proficiency than with the crude use of animals.

With our support, Congress introduced the Battlefield Excellence through Superior Training (BEST) Practices Act, which would end the military’s shooting, stabbing, dismembering, burning, and killing of thousands of animals every year.

In addition, as the only organization working on an international scale on this issue, PETA has now donated simulators to replace animals in surgical training courses in 22 countries—including Bolivia, China, Costa Rica, Ghana, Iraq, Jamaica, Kenya, and Sudan. This means that each year, thousands of goats and other animals will be spared the ordeal of being cut open and killed and that thousands of doctors will gain superior surgical skills. 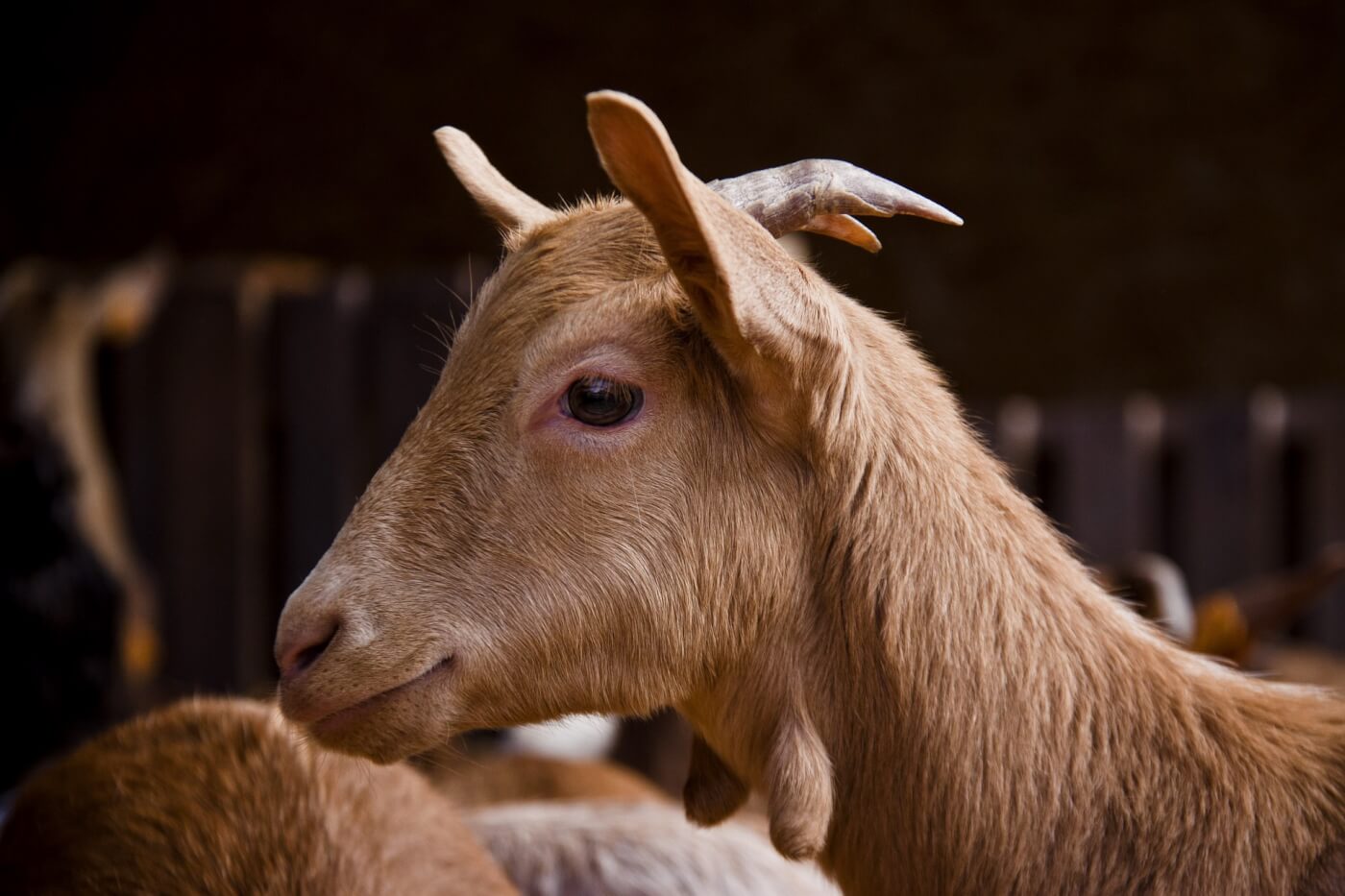 The Milk of Human Cruelty
Chèvre—cheese made out of goats’ milk—is another commodity that comes from the exploitation of goats. Like all mammals, including humans, goats produce milk to feed their own babies, but in the dairy industry, they are repeatedly impregnated and their offspring are cruelly taken away from them so that the milk can instead be sold for human consumption—as a pizza topping, yogurt, and so on. Male kids are killed for their flesh when they are only a few months old.

A PETA Germany investigation into a goat farm revealed that workers regularly forced terrified goats into the milking parlor by punching them or beating them with sticks and that goats with open wounds, deformed hooves, and upper respiratory conditions were denied medical care.

PETA’s success in promoting vegan eating is having an impact on the goat cheese industry. We gave a Compassionate Business Award to the owners of The Sanctuary at Soledad Goats, which, after 20 years of running a goat cheese–making company, stopped breeding goats and started producing a delicious dairy-free cashew cheese instead.

Helping Goats at Every Opportunity
On other fronts, our Emergency Rescue Team and Community Animal Project have assisted in the rescue of numerous goats who were being neglected by their owners and even one wild goat who got stuck in a copper mine.

We have also helped with ordinances banning petting zoos. Not only do petting zoos contribute to a cycle of breeding and exploitation, they also are extremely stressful for the animals who are forced to interact with constant streams of excited, noisy children.