It’s been 33 years since PETA’s precedent-setting Silver Spring monkeys’ case—the case that resulted in the nation’s first arrest and criminal conviction of an animal experimenter for cruelty to animals, the first confiscation of abused animals from a laboratory, and the first U.S. Supreme Court victory for animals used in experiments as well as a revamp of a failed inspection system and changes to the Animal Welfare Act. 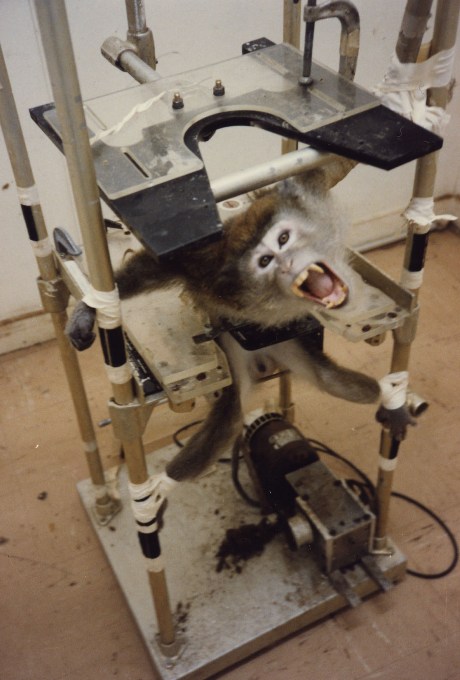 In her informative and empowering book The PETA Practical Guide to Animal Rights, PETA President Ingrid Newkirk talks about the historic case and the broken and abused monkeys. You might want to grab a tissue before reading the following excerpt:

Some months after PETA was founded, we led the police into a laboratory called the Institute for Behavioral Research (IBR), in Silver Spring, Maryland. Once inside, police officers served a search and seizure warrant, seizing seventeen macaque monkeys, survivors from a group originally twice that size.

The monkeys were in bad shape. Many had open, festering wounds, and much of their once lustrous hair was missing. Their normally bushy tails were bare because of malnutrition, and they had pulled out whole clumps of fur on their arms and legs from boredom, frustration, anger, and misery. Although once vigorous and even fierce defenders of their jungle homes, after years of confinement in feces-encrusted cages barely larger than their own bodies, they were now frail and vulnerable. They stared up anxiously at the crowds of uniformed officers and media, almost blinded by the sunlight they had not seen since being snatched many years before from their families in the Philippines.

As the state’s veterinary witnesses would later testify in court, many of the monkeys had been operated on in a crude experiment, their backs cut open and their nerves severed, making movement of their arms difficult or impossible.

One timid little monkey named Billy had not only lost the use of both his arms, but both were also broken. He had been forced to push himself on his elbows across the cage grating and to eat his food by bending over and grasping it between his teeth, although his teeth were painfully infected.

The monkeys would accidentally injure their deadened limbs, sometimes catching and then tearing off their fingers on the jagged, broken, and rusted wires that protruded from their cages. (Police documented thirty-nine of the fingers on the monkeys’ hands were severely deformed or missing.) The experimenters forced the monkeys into a dark, blood-spattered refrigerator and a jury-rigged restraint chair, tying them down with duct tape and burning them with a cigarette lighter, squeezing their flesh, including their testicles, with surgical pliers, and administering electric shocks to them to “test” the feeling in monkeys’ limbs. 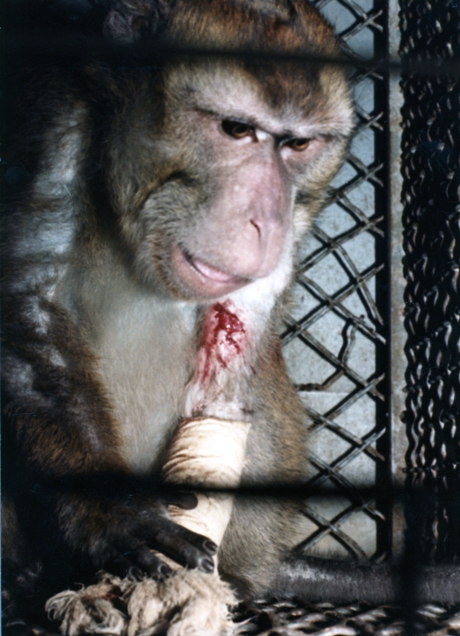 PETA’s investigation led not only to historic cruelty charges and confiscations but also to landmark additions to the Animal Welfare Act and to increased public awareness and scrutiny of animal experiments. This horrific case wasn’t an isolated incident—countless animals are used in cruel experiments every year. When PETA was founded, the cosmetics industry insisted that animal tests were indispensable. Today, more than a thousand companies refuse to test their products on animals, and many forward-thinking scientists are using only sophisticated non-animal methods to study diseases and lifesaving techniques.

As Ingrid points out in The PETA Practical Guide to Animal Rights,the only obstacle standing between the end of animal experimentation and the beginning of sensible and humane health research is that too many people are still accepting the unacceptable. Please learn everything you need to know about helping animals by reading Ingrid’s informative and inspirational book. Then you, too, can help save monkeys and other animals who are suffering at the hands of cruel experimenters. What will you do to make a difference?