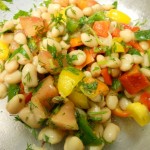 Not many people wear ribbons or run marathons in commemoration of American Stroke Month, but strokes are the fourth leading cause of death—and a leading cause of long-term disability—in the United States. According to the Centers for Disease Control and Prevention (CDC), strokes kill approximately 130,000 Americans every year—that’s about one American every four minutes.

Fortunately, new research suggests that you can reduce your risk of a stroke by almost a third just by eating more fruits and vegetables.

Dr. Yan Qu of the Qingdao Municipal Hospital and the Medical College of Qingdao University in Qingdao, China, and colleagues analyzed 20 prior studies, involving 16,981 strokes among 760,629 people. The researchers found that the people who ate the most fruits and vegetables were 21 percent less likely to have a stroke, compared to those who rarely ate produce. Stroke risk fell by 32 percent for every 200 grams of fruit—and 11 percent for every 200 grams of vegetables—people ate each day.

A stroke, which can lead to severe brain damage or even death, occurs when blood flow to part of the brain is blocked by a clot or a burst blood vessel. Meat, eggs, and dairy products are high in cholesterol and saturated fat, which can clog the arteries that supply blood to your brain, leading to strokes.

By contrast, fruits, vegetables, and other vegan foods are cholesterol-free and generally low in saturated fat. Studies show that vegans are much less likely to have arterial blockages that can cause strokes and heart attacks.

Vegans tend to have considerably lower blood pressure than meat-eaters do, too, which makes them far less susceptible to strokes. And the average vegan is 18 percent leaner than his or her meat-eating counterpart, which is significant, considering that obese people are much more likely to suffer from strokes.

The CDC encourages everyone to eat fruits, vegetables, and other foods that are low in fat, cholesterol, and sodium and high in fiber to prevent strokes. That’s good advice. Why take blood pressure pills and statins and risk a stroke when you can eat great-tasting vegan foods and stay healthy?