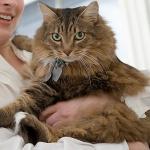 I have to start this blog with a difficult and painful confession: I used to let my cats roam outdoors. I am a card-carrying PETA member and an ethical vegan, and I speak out about animal abuse to anyone who will listen to me. Yet I let my small furry family member go in and out a cat door—which I supplied for him—for years.

Like most people who think that outdoor cats are happy cats, I didn’t think about the dangers that outdoor cats might encounter such as dogs, other animals, automobiles, open garages and sheds that they could get locked into, abusive humans that could harm them, and the list goes on and on.

One morning, I got up to make coffee and spotted Orange, my orange tabby cat, sitting in the middle of the kitchen floor. He roamed outside most summer nights, and I assumed that he had just come in for his breakfast. But he looked strange. He just sat there with none of the familiar meowing or rubbing on my leg to say “good morning.” Upon closer inspection, I noticed that his mouth was hanging open strangely and that there was drool and spittle all over his face. I freaked out, thinking that he had been poisoned, and rushed him to the vet. It turns out that his jaw had been broken. The vet said that Orange was either hit by a car or possibly by a human with a two-by-four.

I was devastated. Orange’s pain and suffering was my fault. And it gets worse. The vet had to wire Orange’s mouth together to try to heal the broken jaw—a wire that was to stay on for six weeks!

I closed the cat door permanently, but the damage had been done. Because of the difficulty that Orange had eating and drinking through the small space between his teeth that the vet had left open, he lost weight—lots of it. He also became dehydrated, and as a result, I had to administer subcutaneous fluids by inserting a needle under his skin once a day. He was miserable.

When the six weeks were up, I took Orange back to the vet to have the wires taken off his jaw. Within one day, his jaw had dropped again. The wires did not work-the jaw had not healed. Orange had to go back to the vet to be rewired again for another six weeks.

We had to euthanize Orange in the end. He was in kidney failure at the time that his jaw was broken, but we had it under control, and he had many years ahead of him. But between not eating and not getting enough fluids in him, the toxins took over, the weight loss was extreme, his depression was deep, and his little body just couldn’t fight anymore.

Cats are curious animals. Many people feel that cats must get their stimulation from outside the home. Wrong. Your cat can get a thrill from chasing a ball of aluminum foil across the floor. Check out Ingrid E. Newkirk’s book 250 Things You Can Do to Make Your Cat Adore You. It’s filled with many fun activities that you and your cat can enjoy together indoors—along with an abundant amount of information to help you and your cat share a long and healthy lifetime together.

There are a few cities in the nation that are contemplating enforcing cat curfews. Laws completely banning outdoor cats are being debated. Outdoor cats are put at risk every time their paws hit the pavement, and we are experiencing a companion-animal overpopulation crisis of such enormity that millions of individual animals sitting in shelters must be euthanized nationwide. Many of these homeless cats come from unspayed or unneutered cats who were let outside to roam.

I learned the hard way not to let my cats outdoors. They are like little children, susceptible to all sorts of dangers. I don’t know anyone who would let their 2-year-old child roam the streets, day or night, unattended.

Why do we perpetuate the myth that cats are miserable when they are kept indoors? And why do we risk causing pain—and even death—to those we love the most?