Do animals experience love? In PETA President Ingrid Newkirk‘s new book, Animalkind, we get the answer straight from the source—the animals themselves:

On October 10, 2003, in Kenya’s Samburu National Reserve, an elephant named Eleanor collapsed. The matriarch of her herd at forty years old, she had been sick for some time: her trunk was swollen and limp, one tusk was broken from a prior fall. Grace, a young elephant, rushed to her fallen friend and, using her tusks, tried to haul Eleanor back to her feet. But she was too weak. Grace called out in distress. Then, she seemed to understand. Instead of leaving, she remained next to her friend, gently stroking her. The following morning, after Eleanor had died, a parade of elephants gathered by her body, sniffing and stroking her. Over the next five days members of Eleanor’s family stayed by her, and even elephants from separate, unrelated families came to pay their respects. A research team who observed the elephants concluded that it was “an example of how elephants and humans may share emotions, such as compassion, and have an awareness and interest about death.”

Ingrid also quotes Australian anthropologist Dr. Thom van Dooren, who told National Geographic magazine that there is “very good evidence to suggest that crows and a number of … mammals grieve for their dead.” As Ingrid notes, “Highly intelligent, corvids have been known to hold ‘funerals’ for their fallen comrades, … gather[ing] around the body for several hours.” She goes on to explain that “[a]ll mothers, no matter if they have two, four, or eight legs, understand what it means to lose a child—that piece of themselves that can never be restored.” When a cow on a dairy farm delivered twins, “knowing that one of her babies would be taken away from her—to be made into veal like most calves—in a ‘Sophie’s Choice’ moment she brought one baby to the farmer and kept one hidden in secret.” 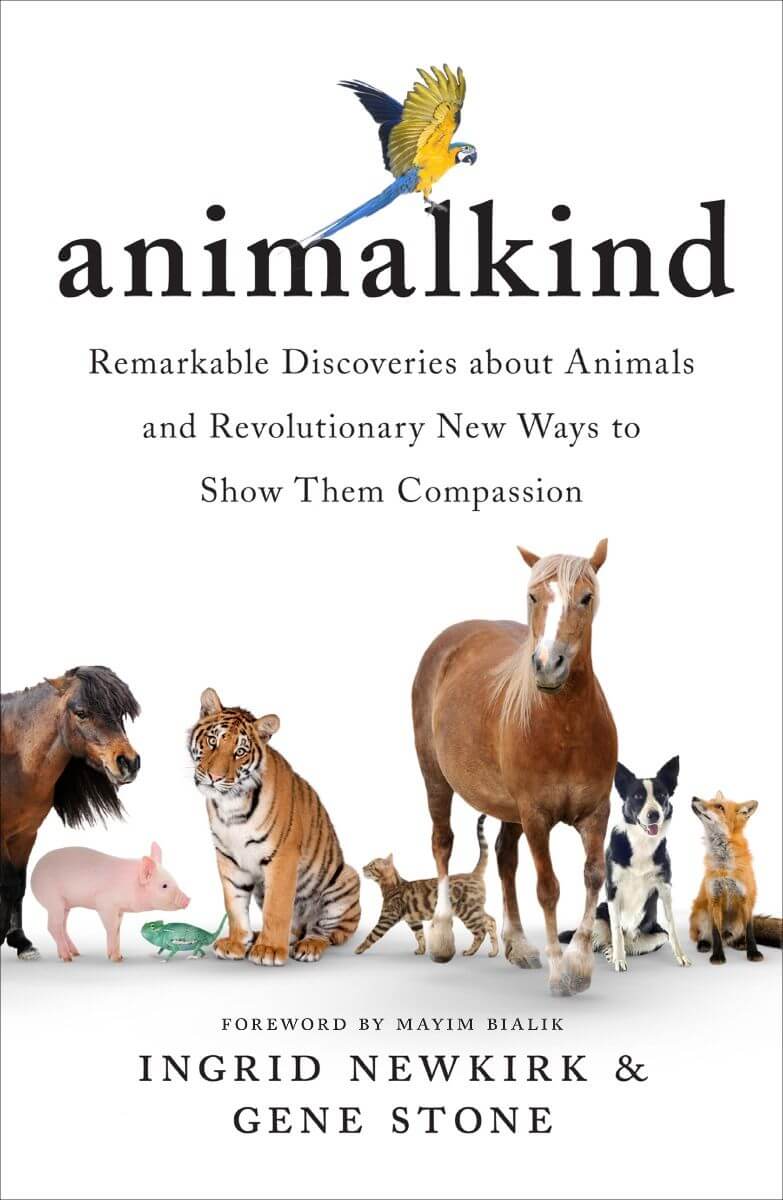 Even tiny mice express their emotions in ways humans don’t entirely understand. As Ingrid writes, much like the animated mice in Cinderella, “real mice actually sing to each other in frequencies too high for the human ear to detect. Using sensitive microphones, Austrian scientists discovered that mice sing to each other during courtship—ultrasonic ballads only they can hear.” She asks, “If we can lie in bed oblivious to the love songs of our tiny friends, what else are we missing?”

Read about elephant funerals, mouse love songs, pufferfish art, seagull games, and other fascinating facts that you can use to help animals every day in Animalkind, now available for order at PETA.org/Store.

What People Are Saying About Animalkind

“This is the book to buy, read, and give to others so that everyone finally sees why they should respect and cherish all animals.”—Anjelica Huston

“Animals are our neighbors on this planet—this book shows how we can become better neighbors.”—Alec Baldwin

“Like me, Ingrid Newkirk believes in protecting all the creatures we love.”—Sir Paul McCartney

“Buy this book for anyone you know who harbors even the slightest doubt that animals aren’t super-clever or that there aren’t many ways to help them—because Newkirk and [Gene] Stone show that animals are, and that you can.”—Edie Falco

“With wisdom and eloquence, Ingrid Newkirk and Gene Stone remind us of what we’ve always known, but too often forget: animals are deserving of our care.”—Jonathan Safran Foer

“This book takes you by the hand and leads you, enchanted, into the wonderful world of diverse animal life.”—James Cromwell

“The scientist in me appreciates Animalkind because it’s full of scientific studies, captivating data, and unbelievable facts about animal behavior. The vegan in me loves this book because it shows readers how easy and rewarding it is to navigate the world without harming animals.”—Mayim Bialik