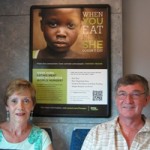 My wife, Vicki (the creator of VeggieRevolution.com), and I went vegetarian in 2000. We both love to cook, but Vicki has a real penchant for creating vegan versions of classic recipes, so steak au poivre becomes veggie burger au poivre (with a vegan sauce, of course). We always try to convince people to eat vegetarian and are definitely not “angry vegans,” so if an omnivore friend cooks a vegetarian meal, we will compliment that person on skipping the meat.

While Vicki has a strong focus on animal rights, I come from the environmentalist side of things. In my view, animals who are going extinct because of human activity suffer just as much as factory-farmed animals, as do fish who slowly suffocate in trawlers. So we both see many reasons for going vegan.

Unfortunately, many people are unaware of—or mentally block out—the animal suffering and try to justify the fact that they eat animals with statements such as “humans have always done that.” We need a different approach, especially a focus on something that people who do not typically care about animals can relate to. We also need to focus more on how easy it is to go vegetarian and vegan.

This winter, we received a peta2 action pack that featured a photo of a starving child on the cover and read, “When you eat meat, she doesn’t eat.” I was immediately struck by its simple message. People who may not care about climate change or animal suffering may still react strongly to children dying from starvation. I started working with Vicki on a possible poster using the material from peta2. We wanted the message to include a positive solution. She came up with the idea of listing mouthwatering vegan dishes that people would connect with. These are dishes from VeggieRevolution.com that have been home-tested. We eat them regularly and find them to be delicious. We decided to fund a campaign but needed some help with the artwork. 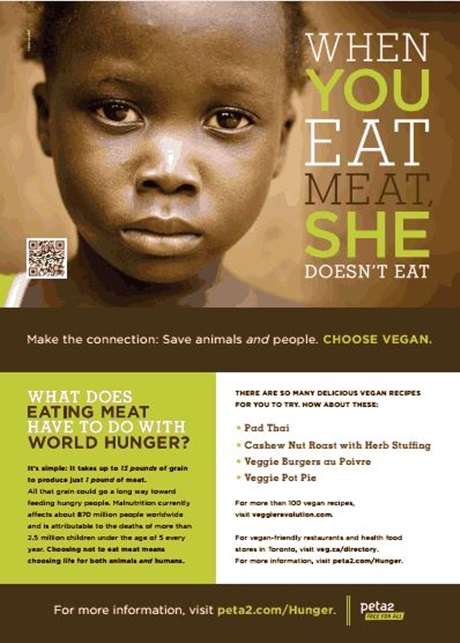 We approached our contact with PETA, Tricia Cummings, and the group eagerly agreed to help us. After a few discussions about how to proceed, we decided to have PETA run the campaign and also that we would fund it in the belief that this approach would give it broader exposure. Over the following months, we worked with PETA to finalize the poster. We decided to launch the campaign on the Toronto-area GO Transit rail network. The company handling the advertising responded very positively when we e-mailed a copy of the poster, noting that “[t]he poster looks great, and I think it would be an excellent fit for our mature, ecologically minded transit users.”

Vicki and I are very excited to have the posters (see VeggieRevolution.com/poster) and hope they make a few people seriously consider going vegan.