October is National “Cut Out Dissection” Month so we’re re-posting this moving article from the PETA Prime archive.

Did you know that October is “Cut Out Dissection” Month? PETA is active in schools across the country, educating teachers and students about alternatives to the unnecessary and cruel practice of dissection. I was thrilled to hear that PETA did this kind work because this issue resonates with me on a very personal level.

More than 30 years ago, as a horticulture student at Utah State University, I was required to take a biology class that included the dissection of a frog as part of its curriculum. The dissection was scheduled for the last week of class. Supposedly, by dissecting a frog, students would learn the names of the muscles in the frog’s body in order to pass the lab exam. 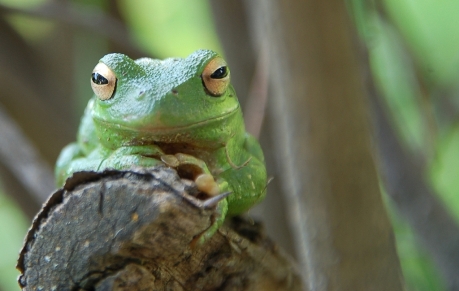 All quarter I dreaded the pending dissection, but I was afraid that if I spoke up or made a fuss, everyone would laugh at me and think that I was a sissy or freak for caring about frogs. So, instead of being brave and doing the right thing, I kept quiet. I skipped class on dissection day and went skiing. I stuffed the frog muscle diagram from my textbook into my ski jacket pocket and memorized the names of the muscles as I rode the chairlift between runs. In the end, I did just fine on the lab exam and went on to have a successful career in agriculture. So I guess that I’m proof positive that we don’t need to kill animals in the name of science.

To this day, I am full of regret that I did not speak out. I regret that I did not stand up for the animals and that I was weak and took the easy way out. Looking back, I truly believe that there were others in the class who would have stood beside me in refusing to dissect and demanding an alternative-if only I had spoken up.

It was Ingrid E. Newkirk and PETA that liberated me and brought me “out of the closet.” When I saw reports in the newspapers and on television about PETA’s efforts to save the Silver Spring monkeys, I realized that I was not alone. I was part of a growing social movement made up of compassionate people who felt the same way that I did. They were not afraid to speak up for their beliefs. There was no reason to feel isolated or alienated anymore, and I’ve been a PETA member ever since. Now, thanks to Ingrid and PETA, there are students who, with the help of peta2, are speaking up for animals and against dissection. And parents and educators are supporting these conscientious young people with the resources at TeachKind.org.

Have you or your family members spoken out against dissection?